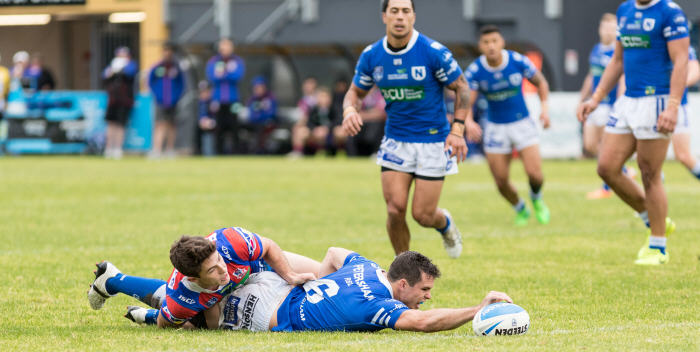 Jets get home in a tight one against the Knights

The Newtown Jets held on for a gripping 18-16 win against the Newcastle Knights in their Intrust Super Premiership 14th round match played at the Cessnock Sports Ground on Saturday.

Newtown led 18-6 at halftime and had to withstand a determined surge by the Knights as they narrowed the Jets’ lead to just two points late in the second half. The whole Newtown team threw themselves into a supreme defensive effort in the last twelve minutes as the Knights unleashed repeated waves of attack at them.

Jets coach Greg Matterson urged his players at half-time to steel themselves for a fightback by the Knights in the second half and they responded to a man. This was a hard-fought victory, coming on top of a long road trip and then playing the game in wet and slippery conditions. This match was an encounter of great importance to both teams, with the winner consolidating a place in the top eight.

Tough front-rower Kurt Dillon was one of Newtown’s best as he made a lot of hard metres straight up the middle. Hooker Kurt Kara was also very solid as he rose to the challenge of this important away game. Giant interchange forward Saulala Houma was playing his 100th game for the Newtown club and he made valuable ground at critical times in the match. Five-eighth Daniel Mortimer scored an outstanding try in the first half and he drove the Knights back to their own line on several occasions with his long, raking kicks. Centres Jordan Drew and Jesse Ramien were very strong in both attack and defence.

The Jets return home to Henson Park next Saturday, 17th June. Their opponents are the in-form Blacktown Workers Sea Eagles (Manly-Warringah’s Intrust Super Premiership partnership club) and the game is timed for kick-off at 3.00pm.