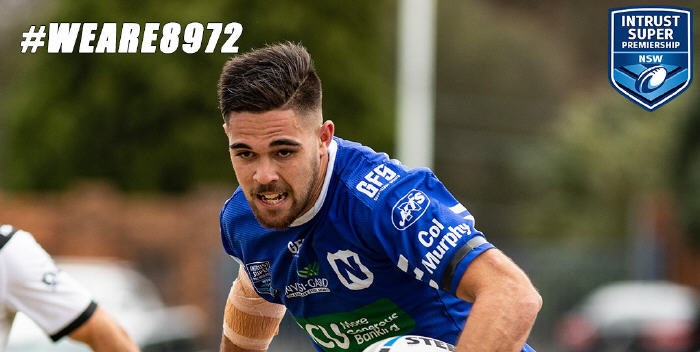 Newtown Jets fullback Will Kennedy scored what might well have been the best try seen this year at Henson Park in today’s win against Western Suburbs. Photo: Mario Facchini, mafphotography

Jets maintain their strong finish to the competition rounds

The Newtown Jets ensured a top four finish in the 2018 Intrust Super Premiership, when they demolished Western Suburbs 32-12 in the club’s reunion day final round competition match at Henson Park.

Both clubs needed to win today to claim the advantage of a double-chance in the upcoming semi-finals. Newtown led 8-0 at half-time but probably should have had more points on the board. The Jets defence had been very strong all through the first half while winger Sione Katoa and centre Aaron Gray had been Newtown’s try-scorers.. The likelihood of rain in the morning undoubtedly affected today’s attendance, but there was still a good crowd on hand for this critical encounter between the two old NSWRL foundation clubs.

The Jets took a strong grip on the game when fullback Will Kennedy scored a breathtaking long distance try in the 47th minute. Five minutes later Jets five-eighth Jack A. Williams showcased supreme skills as he dummied his way through the Magpies defence to score under the northern end posts. Further tries to Reubenn Rennie and Wes Lolo took Newtown’s lead out to 32-6, and with just ten minutes left to play the reunion day crowd was roaring the Jets home.

The Newtown Jets move forward into a qualifying final next weekend (2nd v 3rd). The Jets’ opponents will be St George-Illawarra and the venue will be Panthers Stadium. Details of the day, date and kick-off time will be made known as soon as this information is confirmed.

The match was televised live on Channel Nine and broadcast live on Steele Sports (www.steelesports.com.au)

The Western Suburbs team was:

Here are the results of today’s games in the ISP NSW and the updated competition table: http://live.nswrl.com.au/comp/413e134259bc4ebcf

He was also the last Newtown player to have been directly associated with the 1943 season (when Newtown won its last first grade premiership).

Mr Norrish was also a well-performed middleweight boxer who fought professionally between 1942 and 1946.

The Newtown RLFC extends since condolences to the Norrish family.