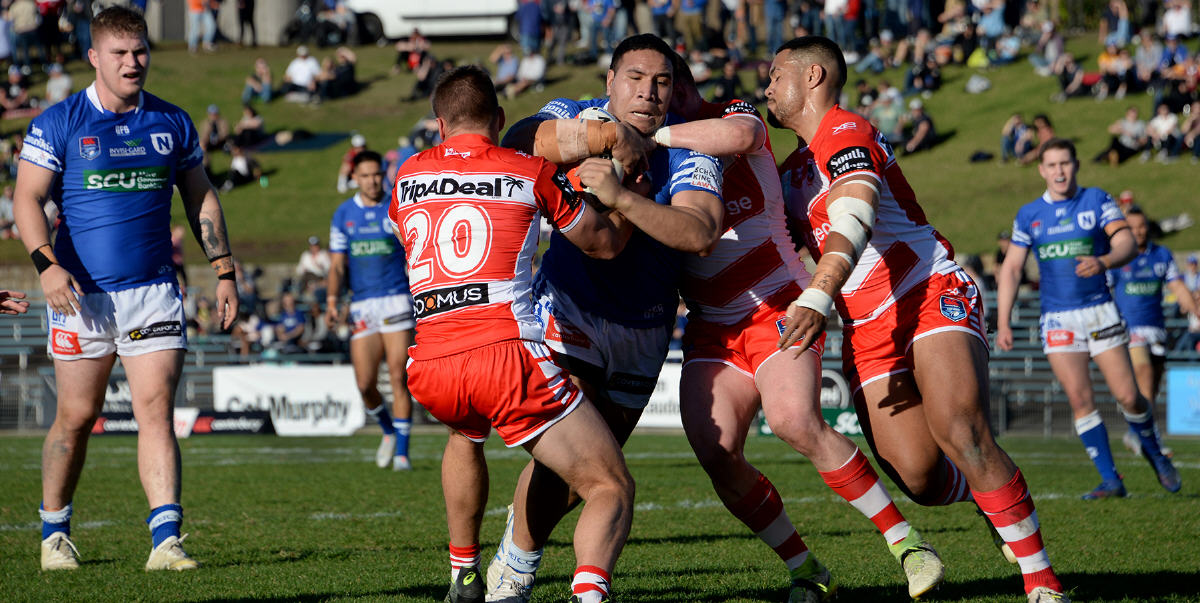 Newtown Jets front-rower Wes Lolo plunges into the middle of the St George-Illawarra defence at Henson Park last Saturday. The other Jets players visible in the photo are (from left) Daniel Vasquez, Will Kennedy, Jack A. Williams and Latrell Schaumkel. Photo: Mario Facchini, mafphotography

Jets nearly brought undone by a lacklustre second half

The Newtown Jets gained two valuable competition points with their 24-18 victory over second-placed St George-Illawarra at Henson Park on Saturday afternoon. The Jets dominated the first half and ran up a 24-4 lead by half-time. They were kept scoreless in the second half and were put under great defensive pressure as the Dragons fought their way back into the game.

The Jets had several opportunities in the second half to put the result beyond doubt but their execution and finishing fell away badly. Coach Greg Matterson was less than complimentary in the post-match dressing rooms in discussing Newtown’s second half display.

Both teams had considerably changed team lists due to State of Origin commitments and injuries. Newtown made a flying start with two tries in the opening eight minutes and they restricted the Dragons just the one try in the first forty minutes. The try-scorers for the Jets in their productive first half included Will Kennedy, Daniel Vasquez, Tyla Tamou, Jack A. Williams and Latrell Schaumkel.

Newtown’s better players included front-rowers Wes Lolo and Jimmy Jolliffe and classy hooker Blayke Brailey. Lock Daniel Vasquez made an impressive comeback after a lay-off due to injury. Halves Jack A. Williams and Luke Polselli were the best of the backs.

With this win the Jets secured the Tom Kirk Cup for 2019. This trophy is competed for over the two competition games and honours the memory of the champion fullback and goal-kicker Tom Kirk.

The Jets play away to the North Sydney Bears next Sunday, 14th July, at North Sydney Oval. This Round 17 Canterbury Cup NSW match is being televised and kicks off at 1.10pm.

Kayleb Milne was on debut for Newtown after having transferred from the Melbourne Storm to the Cronulla Sharks in the previous week.

Grant Garvey was also on debut for the Jets. He had represented NSW Under 20s in 2015.

It is also the deciding match in the Frank Hyde Shield series for 2019.