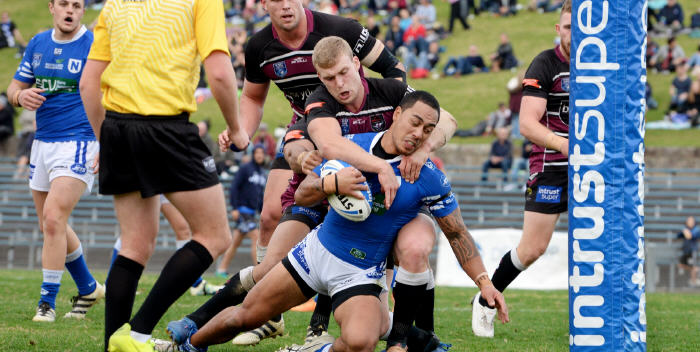 Newtown hooker Kurt Kara goes very close to scoring in the first half against the Blacktown Workers Sea Eagles at Henson Park on Saturday. Jets front-rower Jimmy Jolliffe is in the background. Photo: Michael Magee Photography.

A less than full-strength Newtown Jets team was well beaten 42-18 by the Blacktown Workers Sea Eagles in the 15th round ISP rugby league match at Henson Park on Saturday. The Jets were missing several players who were on NRL duty with the Cronulla Sharks and they were outclassed in the second half by the much-improved Sea Eagles team.

Newtown trailed 18-12 at halftime but they had the field position and attacking opportunities in the first half to have put more points on the board. The Jets spent a lot of time in the first forty minutes at Blacktown’s end of the field but they lacked the variation in attack and precise execution to break through the Sea Eagles solid defensive line. Newtown added to their problems by gifting the Sea Eagles a couple of soft tries that should have been prevented.

The second half was largely one-way traffic as the Sea Eagles, fielding a large contingent of Manly-Warringah NRL squad members, proved why they are now regarded as one of the most dangerous teams in the ISP NSW competition. Coach Matterson commented that it was one of those days where the Jets had to get everything right to stay in the game. He added that the Newtown boys didn’t have enough ideas to get across Blacktown’s tryline more often in the first half.

Fullback Matt Evans tried hard all day, winger James Tuitahi made some good runs with the ball from deep inside Jets territory. Kurt Dillon and Kurt Kara were two of Newtown’s best forwards, and giant prop Saulala Houma was missed when he left the field with a leg injury early in the second half.

The Jets are back at Henson Park again next Saturday, 24th June, when they take on Wests Tigers. This 16th round ISP NSW match will kick off at 3.00pm.