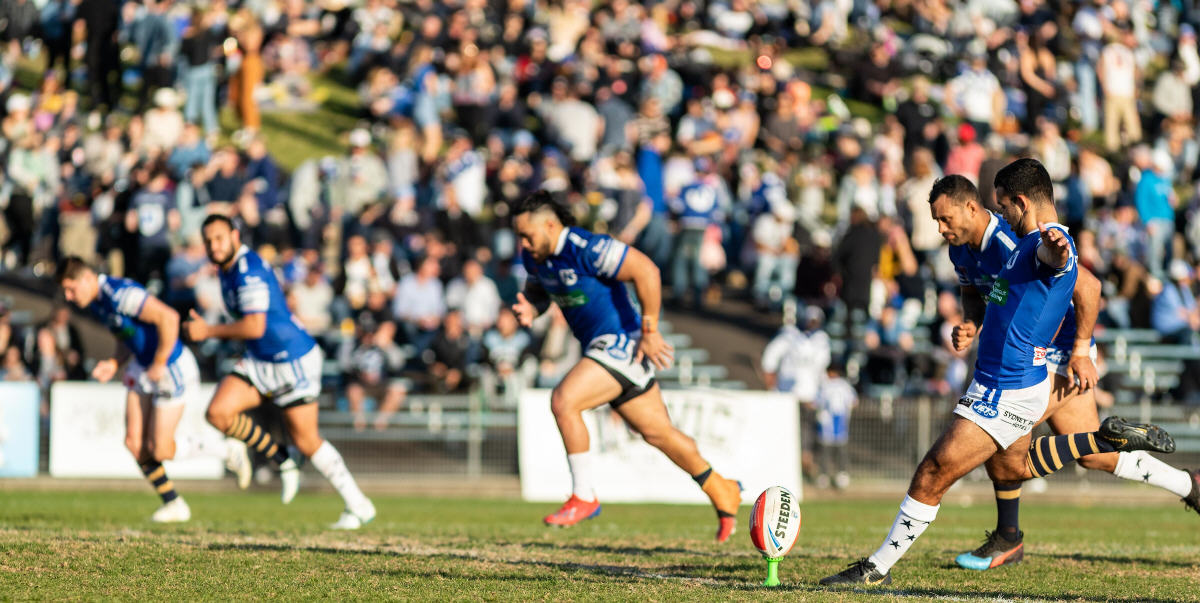 Newtown Jets hooker Braydon Trindall gets the second half underway at Henson Park on Saturday, with the colossal BF&F Festival crowd looming in the background. Photo: Mario Facchini, mafphotography

It truly was a day to remember for the Newtown Jets at Henson Park on Saturday. The combination of the Jets-Bulldogs Canterbury Cup clash and the fourth annual Beer, Footy and Food Festival drew a crowd estimated by authoritative sources as being in excess of 10,000.

In addition to the wonderful atmosphere created by the biggest crowd to attend a rugby league match at Henson Park in decades, the 10th placed Newtown Jets emphatically defeated the competition leaders Canterbury-Bankstown by 32-12, after leading 18-4 at halftime.

This was one of the Jets most impressive performances for the 2019 season. Boosted by the inclusion of Cronulla Sharks NRL squad members Sione Katoa, Kyle Flanagan, Scott Sorensen and Jayson Bukuya, the reinforced Jets line-up scored six tries to three and proved they are certainly capable of making the Canterbury Cup finals.

Winger Sione Katoa was in superlative form, scoring three tries in the first half and setting up another midway through the second session. Fullback Will Kennedy had his best game this season and scored two slashing tries in the second half that put the result beyond doubt.

The Jets take on Manly-Warringah’s partnership club, Blacktown Workers, at Lottoland Stadium (Brookvale Oval) on Saturday, 3rd August at 12.45pm. This match will be televised live on Fox Sports.

This match will be televised live on Fox League.

(This game is a curtain-raiser to the Manly-Warringah v Newcastle Knights NRL fixture).