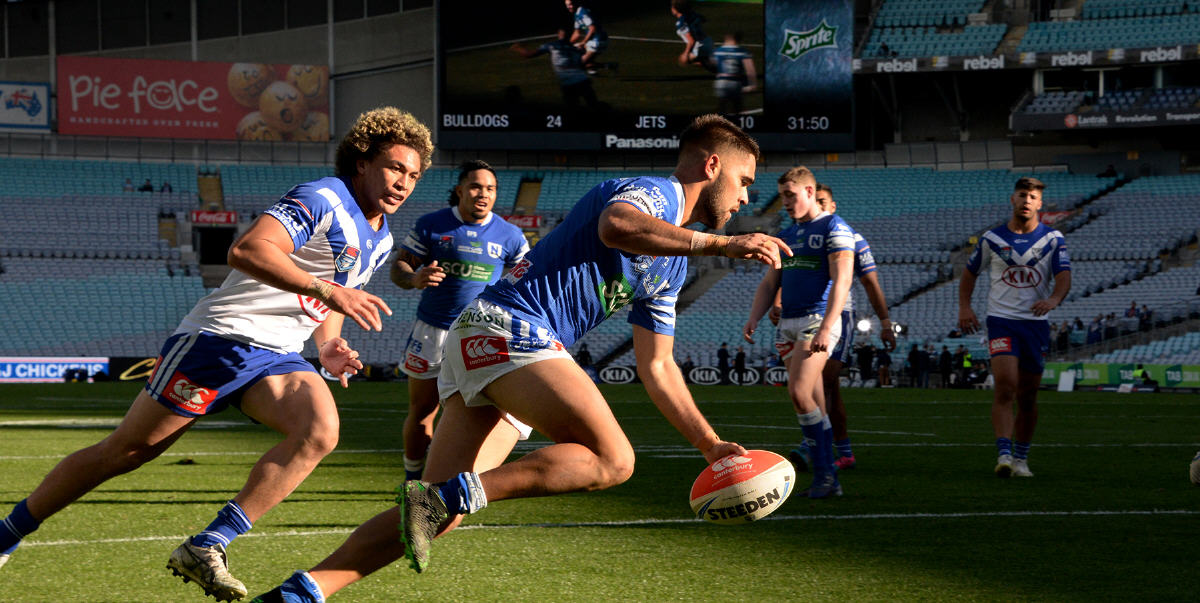 The Newtown Jets recent march up the Canterbury Cup NSW competition table hit a major obstacle at ANZ Stadium on Sunday afternoon. The Canterbury Bulldogs, the defending premiers from 2018, turned on an impressive display in seeing off the Jets by 40-28, and have moved into first place on the competition table after 15 rounds.

The Jets came up against a well-drilled and in-form Bulldogs team that effectively shut Newtown out of the game in the first half . The Bulldogs dominated possession and field position and ran up a 24-10 lead by halftime. The Jets first half tries were scored by on-debut centre Tyrone Phillips and fullback Will Kennedy.

Newtown hit back early in the second half through a second try to Kennedy, but Canterbury reasserted control and extended their lead to 40-16 with ten minutes left to play. The Jets competed gamely to the end and scored two more tries before fulltime. Second-rower Siosifa Talakai and halfback Braydon Trindall were the try-scorers late in the second half.

Newtown’s best players were Greg Eastwood, Siosifa Talakai and Billy Magoulias in the forwards and Jack A. Williams and Will Kennedy in the backs.

The Jets return to their Henson Park headquarters next Saturday, 6th July, when they meet St George-Illawarra in the 16th round of the Canterbury Cup NSW competition. This match is timed to start at 3.00pm.

Classy centre Ronaldo Mulitalo was a late withdrawal and was replaced by Tyrone Phillips. Phillips had signed for Newtown during the week after having previously played with Canterbury-Bankstown and Penrith.

First half: Canterbury had 67% of possession.

Second half: Canterbury had 56% of possession.

The Bulldogs had 62% of possession overall for the match.

Bear in mind that the Bulldogs have one of the biggest packs of forwards in the Canterbury Cup NSW competition.

Congratulations also to Peter Baumgart who recently celebrated his 50th birthday. Big Pete is an immensely popular former Newtown Jets player from the 1990s and early 2000s. Several of Peter’s Metropolitan Cup premiership-winning team-mates were in attendance at the birthday celebrations, including his former team coach Colin Murphy.