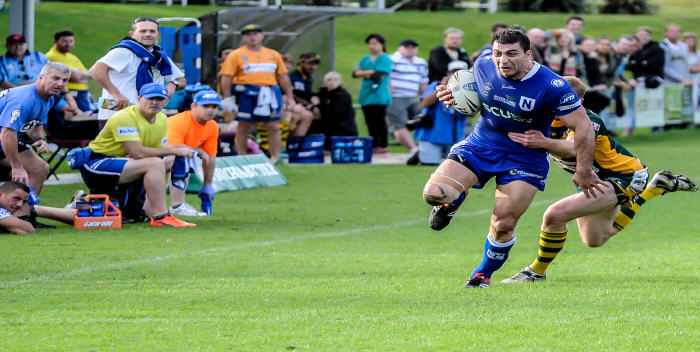 Report on the NSWRL VB NSW Cup Round Ten match between the Wyong Roos and Newtown Jets, played at the Morry Breen Oval on Sunday, 18th May 2014.

The Newtown Jets have moved to within striking distance of a NSW Cup top eight position, following their 34-8 win against the Wyong Roos at Morry Breen Oval last Sunday afternoon. The Jets turned on a well-controlled performance against a team that has been one of this season’s most improved performers. Newtown had opened up an 18-4 lead by half-time and maintained their dominance for most of the second half. This away win was all the more welcome given that it was achieved at a venue where Newtown hasn’t had a good record in recent years.

The Jets began somewhat indifferently, failing to complete their first three sets of possession and conceding an unconverted try to the Roos in the seventh minute. Newtown began to assert authority in the forwards and Ryan Verlinden ran off a good short pass from Kane Evans to post Newtown’s first try in the 18th minute. Rhyse Martin had assumed Newtown’s goal-kicking duties for the day in the absence of Chris Taripo who was unavailable through injury. The Jets extended their lead through tries to Saulala Houma in the 33rd minute and Ray Moujalli two minutes prior to half-time. Both of these tries came from determined efforts by these two big forwards and Rhyse Martin converted all three of Newtown’s first half tries.

The Jets controlled field position in the early stages of the second half but didn’t score until the 53rd minute, when winger Tautau Moga scored on the end of an orthodox passing movement that created an overlap. Newtown took an unassailable lead early in the fourth quarter with tries to centre Josh Davis and fullback Jonathon Reuben, both of which were converted by Rhyse Martin. Hooker Heath L’Estrange had bounded out from dummy-half and sent Reuben dashing in under the posts. The Roos defended their line for the remainder of the game and scored a consolation try five minutes out from fulltime.

The Jets coaching staff rated Kane Evans as being Newtown’s best forward, in a display notable for his rugged duel with the former Australian Test player Mark O’Meley. Evans received strong support from the other members of the Jets powerhouse brigade in Saulala Houma, Remi Casty, Ryan Verlinden, Ray Moujalli and Andrew Pearn. Newtown’s forward strength reigned supreme in the “middle third” and ensured the Jets territorial dominance. Arana Taumata played well at halfback and Tautau Moga and Jonathon Reuben continued to show improvement. Centre Josh Davis was very solid and is going to be a valuable backline player for the Jets in the upcoming weeks. Heath L’Estrange’s experience and leadership skills were once again evident.

The Newtown Jets return home to Henson Park this Saturday (24th May) when they confront another of this season’s well-performed teams , the Illawarra Cutters. This Round Eleven NSW Cup fixture gets underway at 3.00pm.