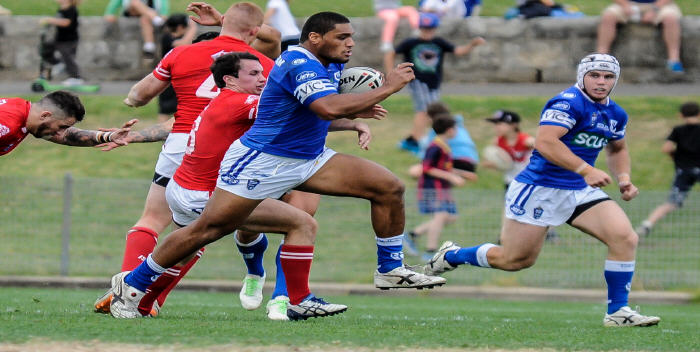 Report on the Round Eleven NSWRL VB NSW Cup match between Newtown and the Illawarra Cutters, played at Henson Park on Saturday, 24th May 2014.

There was plenty happening at Henson Park last Saturday to make it a day to remember in the course of the Newtown Jets 2014 season. Among the day’s events there had been speculation that the St George-Illawarra marquee signing Benji Marshall would play with the Dragons NSW Cup partnership club the Illawarra Cutters; the first-ever all-female Rugby League commentary team of Debbie Spillane, Joanna Lester and Melinda Farrell made history by calling the Jets-Cutters game on the internet; plus the Newtown Jets turned on some of their best football for this season in defeating the Cutters by 42-22.

This season’s best crowd at Henson Park saw the Jets put on an authoritative display that enabled them to score five tries in the first twenty-five minutes. Newtown had a huge share of possession and played with the structure, teamwork and self-assurance to punish the Cutters. Daniel Mortimer, on loan from the Sydney Roosters and playing at five-eighth with all the élan he showed in the latter part of the 2012 premiership season, scored Newtown’s first two tries and was to be involved in others. Fullback Jonathon Reuben has recaptured the try-scoring form that saw him rated as one of the players of the year in the 2013 Holden Cup competition, and he crossed the stripe twice for Newtown in the first half. Sydney Roosters Holden Cup front-rower Willis Meehan made his NSW Cup competition match debut with the Jets and powered over for one of Newtown’s first half tries. The Jets led 24-6 at the break on the back of a 65 per cent share of possession and a 90 per cent completion rate.

Newtown added to their half-time lead with a try to second-rower Rhyse Martin five minutes into the second half. The fourth-placed Cutters started to get a better share of possession and gathered momentum as they staged their inevitable fightback. The South Coast boys scored two quick tries and when they posted their third try of the second half in the twentieth minute they were right back in the game, trailing by 30-22. The Jets managed to regroup and an outstanding try to the impressive 18 years old Meehan virtually settled the contest. Halfback Arana Taumata darted across with nine minutes left to wrap up the result for Newtown. Rhyse Martin kicked two goals in the first half and Taumata took over the goal-kicking duties in the second session and landed three conversions.

Jets head coach Greg Matterson regarded the opening thirty minutes as being close to the best football played by the Newtown team this season. Saturday’s win showed the benefits of a team showing more cohesion, belief in each other, enthusiasm and focus. The task ahead is to maintain the good form, team spirit and momentum as the Jets are still one point outside of the top eight and there are plenty of tough assignments ahead. The coaching staff nominated Daniel Mortimer and Willis Meehan as two of the best on the day, while hooker Heath L’Estrange showed the class that has been evident all the way through his long playing career. Saulala Houma ran with enormous power and delivered some good offloads, especially for Jonathon Reuben’s second try. Kurt Kara had one of his best games this season and Ryan Verlinden was a strong performer until he was injured. Ex-North Sydney centre Matt Evans did an excellent defensive job and the rugged Josh Davis is proving to be a valuable backline acquisition.