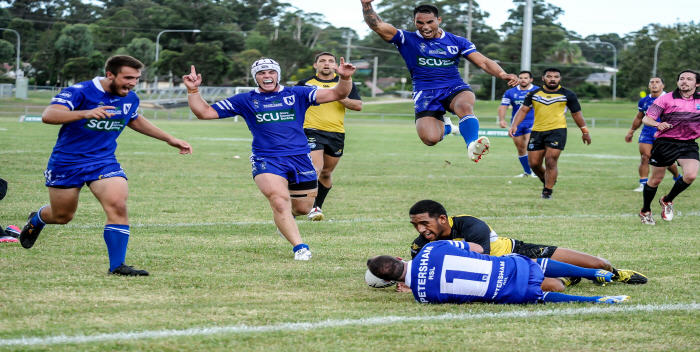 Report on the third round NSWRL VB NSW Cup match between Mounties and Newtown, played on Saturday, 22nd March 2014, plus details of Newtown’s next match.

The Newtown Jets turned on a strong first half against the unbeaten competition leaders, Mounties, last Saturday but were blown away in the second forty minutes. The Jets and the Canberra Raiders-aligned Mounties were locked up at 10-all at half-time but the addition of three unanswered tries in the third quarter saw the Raiders feeder club go on to record a 38-16 victory.

The Jets made a less than ideal start with the Mounties sprinting away for a long- distance intercept try in the second minute. Newtown’s new signing, halfback Arana Taumata, put through two kicks that resulted in tries to the Jets, one by winger Jonathon Reuben in the 16th minute and another by fullback Shannon Gallant in the 28th. The Jets tackled well and retained this 10-6 lead until late in the first half, when the Mounties equalised through an unconverted try after taking advantage of two successive penalties.

An ordinary second half performance cost the Jets dearly, with the Mounties scoring three tries to take a 26-10 lead after fifteen minutes. The Jets had a poor second half completion rate and turned over a lot of possession. The big Mounties pack won the battle of the rucks and dominated territorially. The Mounties halves dictated terms in the second half and kept the Jets under continued pressure.

Jets centre Brett Lane scored Newtown’s only second half try through an intercept three minutes out from full-time. Mounties then finished the game with a runaway try after gathering in a short kick from the Jets to make the final score 38-16.

Jack Siejka and David Harris were the best of the Newtown forwards while halfback Arana Taumata showed enough in his first game with the Jets to indicate that he will add to the team’s attacking potential.

The Jets travel southwards down the Princes Highway next Saturday, 29th March, when they take on the St George-Illawarra partnership club, the Illawarra Cutters, at WIN Stadium Wollongong. This fourth round NSW Cup match is set for a 3.00pm kick-off.