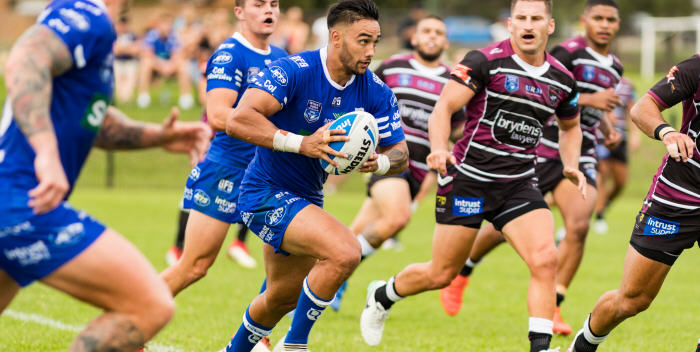 Newtown Jets second-rower Briton Nikora takes the ball forward against the Blacktown Workers defence yesterday. Nikora was forced to leave the field with a head knock late in the second half. Photo: Mario Facchini (MAF Photography)

Newtown lost 28-16 to Blacktown Workers Sea Eagles in the round three Intrust Super Premiership match played at the H E Laybutt Sports Complex on Sunday. The Manly-Warringah partnership club led 20-16 at halftime, after the Jets had trailed 20-6 midway through the first half.

The Jets fielded a changed line-up to the team that had beaten St George-Illawarra ten days previously. Giant front-rower Braden Uele made his debut for Newtown, as did five-eighth Kyle Flanagan and centre Aaron Gray. Prop Kurt Dillon, who is so well-known to Newtown supporters, also played for the Jets yesterday. Ex-Sharks under 20’s forward Daniel Vasquez was also playing his first competition game for the Jets.

Newtown threw everything they could at the Sea Eagles in what was a tough physical encounter played in very warm conditions. The Jets didn’t quite have the necessary attacking creativity and precision to break through the unyielding Blacktown defence. Scott Sorensen was one of Newtown’s best forwards and Will Kennedy was very sound at fullback.

The impressive Braden Uele scored Newtown’s first try in the ninth minute, and the Jets narrowed the deficit through further tries to second-rower Anthony Moraitis and winger Edrick Lee late in the first half. Newtown was held scoreless in the second half despite having some extended spells in possession at the Sea Eagles’ end of the field.

The Newtown Jets play away next Saturday, 31st March, against Penrith at Panthers Stadium at 1.00pm. This fourth round ISP NSW match will be televised live on Channel Nine.

This match was broadcast live on Triple H FM 100.1