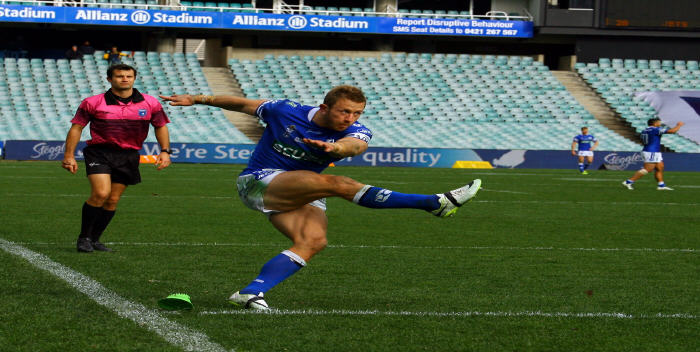 Nathan Stapleton lands the conversion that locked the scores at 30-all. He kicked 5 from 5 in extremely difficult conditions and scored a try on debut in the Jets’ miraculous come from behind victory. Photo: Mario Facchini, mafphotography

Report on the 19th Round NSWRL VB NSW Cup match between Newtown and the Penrith Panthers, played at Allianz Stadium on Saturday, 19th July 2014 and televised live on Fox Sports by Glen ‘Bumper’ Dwyer.

In one of the most remarkable NSW Cup matches of recent years, the Newtown Jets turned around a 30-6 points deficit with twenty minutes left to play into a 31-30 victory against the competition leaders Penrith. The Panthers are the NSW Cup premiership favourites and were aiming for their 12th successive win in this season’s competition rounds, after having beaten Newtown 36-20 last Saturday at Sportingbet Stadium.

The Jets needed to win this game at Allianz Stadium to remain in touch with the top eight teams. Newtown’s first half didn’t look too promising as the Panthers strode away to a 20-6 lead after 25 minutes, with the Jets’ points coming from a try and conversion to the former Cronulla winger Nathan Stapleton who was on debut with the Blues. The Panther were having the better of the forwards’ battle and Newtown had made poor decisions in defence. The Jets had probably done reasonably well to restrict Penrith to twenty points and to prevent them from scoring again in the back end of the first half.

Coach Greg Matterson’s halftime message to the Jets was basically that they weren’t out of the game, and that they should draw on their experience from the previous Saturday’s match when they had fought back to get within a converted try of the Panthers late in the second half. Matterson urged Newtown’s big forwards to lift their game and really put it to their opponents in the second half.

The first ten minutes of the second half looked grim for the Jets as the Panthers added two more tries and extended their lead to 30-6. It all seemed to be a matter of by how many points for the competition leaders. Newtown supporters were hoping that their team could at least be competitive in a match that was going out live across the country on Fox Sports.

With Penrith still leading by 30-6 as the game moved into the fourth quarter, a transformation took place when the Jets back-rower Dave Harris scored after the Panthers failed to defuse a Jets cross-field kick into their in-goal. Stapleton converted and four minutes later Harris was again involved, when as the stand-in hooker he won the ball against a Panthers scrum-feed at Penrith’s end of the field. In the ensuing set, Jets prop Kane Evans charged at the line, was knocked down and not held and then safely grounded the ball for Newtown’s third try. Stapleton’s third conversion had Newtown back in the game with the Panthers in front by 30-18.

The game’s momentum had seemingly swung to the Jets and they dominated possession and field position. The tireless Harris put a grubber kick into the Panthers in-goal in the 69th minute, which evaded several Penrith defenders and allowed fullback Jonathon Reuben to display his acrobatic skills to gather the bouncing ball and score Newtown’s fourth try. From the sideline and with a blustery southerly blowing, the nerveless Stapleton nailed the conversion for Newtown to trail 30-24.

Newtown’s big forwards had commandeered the midfield and drove the ball deep into Panthers territory. Eight minutes from fulltime, the Jets moved the ball quickly through several pairs of hands to Matt Evans who scored in the right-hand northern corner. Stapleton’s goal-kicking was flawless as he landed his fifth conversion to tie the scores up at 30-all. Luck broke the Jets way as the Panthers kicked out on the full. The Jets forwards made several metre-gaining drives towards the posts before Scott Dureau, one of the best field-goal exponents in the business, slotted over what was to be the match-winning one-pointer five minutes out from the final siren. Newtown still had to defend two sets at their own end and the Panthers missed with two field goal attempts, before the full-time siren brought to an end what had been an engrossing contest.

While clearly delighted at his team’s amazing win, coach Matterson was concerned about what had gone wrong in the first sixty minutes of the game. He stressed that greater discipline and defensive awareness would be needed in the upcoming games. The coaching staff commended the great work of forwards Ryan Verlinden, Ray Moujalli, Kane Evans (Fox Television’s man of the match) and Saulala Houma, Dave Harris for his livewire opportunism, Sio Siua Taukeiaho for another strong all-round game, Nathan Stapleton for an outstanding all-round performance on debut, and Scott Dureau for his cool-headed organisational role and his masterful drop goal.

The Newtown Jets face another must-win appointment on Friday evening (25th July, 2014), against Canterbury-Bankstown at Belmore Sports Ground. This 20th Round NSW Cup match kicks off at 7.00pm.