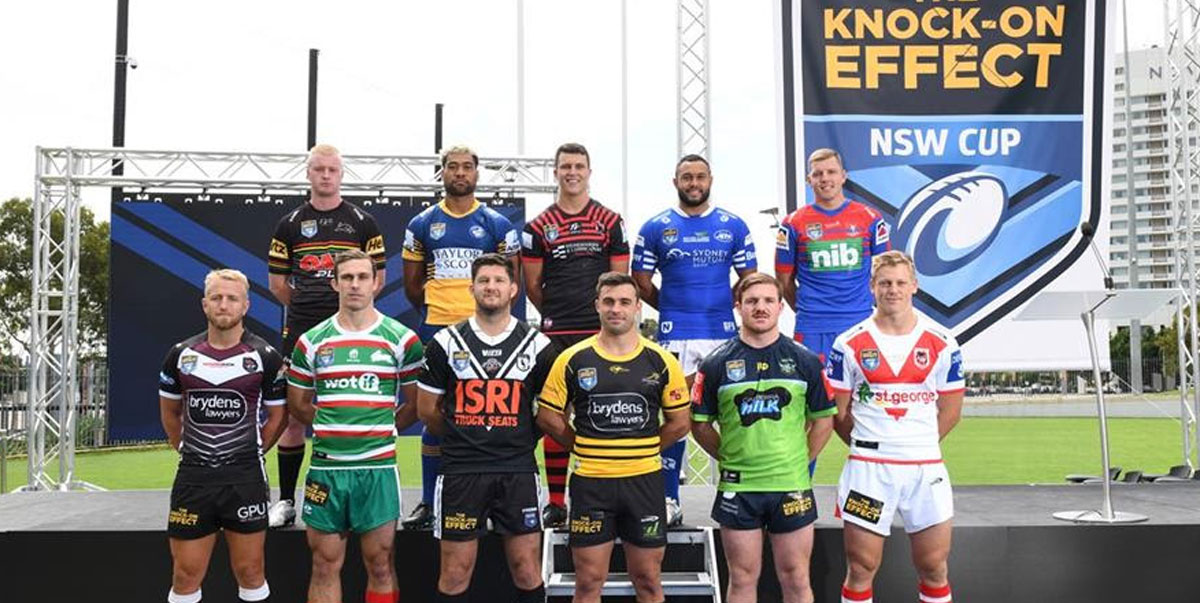 The NSWRL has announced a new naming rights sponsor for the state’s premier competition, The Knock-On Effect NSW Cup, at the launch of the 2021 season which will see 14 competitions being administered across the state.

The new partnership will be in place for the next three years and was announced today by NSWRL Chief Executive David Trodden at the launch of the NSWRL season at the NSWRL Centre of Excellence at Sydney Olympic Park.

Trodden said it was fitting to extend the partnership with Transport for NSW after the success of The Knock-On Effect campaign, which aims to reduce road deaths and serious injuries on NSW roads.

“I’m pleased to announce the NSWRL will further extend its association with Transport for NSW for another three years with our premier competition to be now known as The Knock-On Effect NSW Cup,” Trodden said.

“The Knock-On Effect is a campaign the NSWRL is proud to be associated with and I’m confident this partnership will bring even more exposure to this valuable cause to all Rugby League fans across NSW.”

McCarthy said the popularity of Rugby League had a key role to play in helping deliver important messages to the community and the re-naming of the Cup will provide an important pathway to access and engage fans across the state.

Features of The Knock-On Effect NSW Cup includes 58 NRL curtain-raisers, at least 23 games to be broadcast by FOX SPORTS, a Round 10 standalone fixture on Fox League on FOX SPORTS on Thursday night between foundation clubs North Sydney Bears and Western Suburbs Magpies, the return of the Canberra Raiders under their own logo for the first time in 14 years and the Newtown Jets and Parramatta Eels to play at Henson Park in August to celebrate the 40th anniversary of the 1981 Grand Final.

The Ron Massey Cup will see the return of Fiji’s Kaiviti Silktails, who have already arrived in Australia and will be based at Mascot for the next seven months. The Silktails, who became the first team from Fiji to play in a NSWRL competition after being admitted last year, managed only one game in 2020 before the competition was cancelled due to coronavirus.

The 2021 season will also see the return of the Presidents Cup following its success in 2020. The new format will see the premiers of the Ron Massey Cup, Denton Engineering Cup and Illawarra Cup plus a fourth-best team play in a knockout format before the Grand Final at Bankwest Stadium on Sunday 26 September.

Other Grand Finals to be played that day will include The Knock-On Effect NSW Cup and the Jersey Flegg Cup. The decider for the Harvey Norman NSW Women’s Premiership will be held on the weekend of 24-25 July, the Grand Finals for the Denton Engineering Cup and Illawarra Cup will be on 4-5 September, and the Ron Massey Cup and Sydney Shield on 11-12 September.

The Grand Finals for the Men’s and Women’s Country Championships, SLE Laurie Daley Cup and SLE Andrew Johns Cup will be on 27-28 March, while the deciders for the UNE SG Ball Cup, Harvey Norman Tarsha Gale Cup and UNE Harold Matthews Cup will be on 24-25 April.

The season will also include several community programs including Try League for Culturally and Linguistically Diverse (CALD) communities, Changing Rooms which assists youth with mental fitness, and Hogs Tours of regional NSW.

The representative calendar will include the Ampol State of Origin series, the Ampol Women’s Origin game, an Under 19s Origin game and City-Country matches for Open Age, Under 18s and Under 16s.

“Our Origin games will be something to look forward to as they revert back to their traditional mid-season formats, the Presidents Cup is an exciting innovation, the Silktails will draw plenty of interest, and The Knock-On Effect Cup is back with a new sponsor,” Trodden said.

“I’m really looking forward to the 2021 season and the return of all our major competitions after the disruptions of last year and I can’t wait for kick-off.”

(Press release courtesy of the NSWRL.)