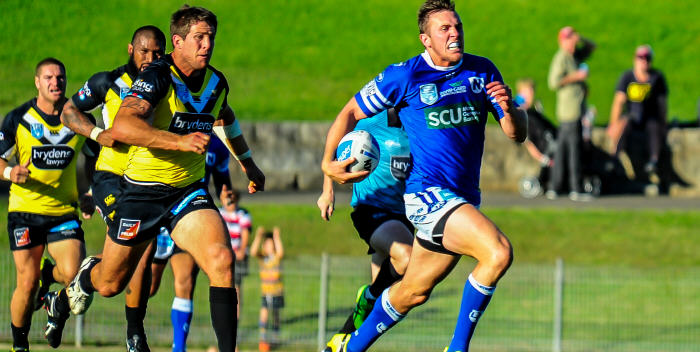 Kurt Capewell continues to impress for the Jets and is fast becoming a crowd favourite at Henson Park. Unfortunately it wasn't enough to get Newtown home against competition leaders Mounties. Photo: Gary Sutherland Photography.

A big crowd for Ladies Day at Henson Park

It was a perfect day weather-wise and there was a big crowd in attendance – but the Jets just fell short in this Intrust Super Premiership NSW 10th round top of the table clash between Newtown and Mounties.

Newtown attacking Mounties in the opening three minutes, forced a goal-line drop out on Mounties

Bad pass to Taumata, and he’s caught on the 5th tacle

Penalty to Newtown 20 metres out from Mounties line (8th min)

3rd turnover by Newtown when in possession at Mounties end

Mounties knock on in the 15th min at their own end

Josh Cleeland steps his way through to score in the 17th min Converted by Fa’amanu (Nu) brown Newtown 6-0 Coach Greg Matterson says: “I told them that the little men with footwork would really trouble the big blokes in Mounties defensive line”.

Mounties kick out on the full – but Newtown fails to find the line from their penalty kick at the halfway line So many errors from both teams – somewhat strange for 1 v 2 on the competition table.

Great break by Kurt Capewell from his end of the field, but Matt Evans who backed up gets tackled out (21st minute)

Penalty for a play the ball infringement to Mounties in the 26th min, but they lose it early in the tackle count

Mounties score in the next set in the north-western corner (Mitch Barnett) and Cameron Phelps converts from wide out. 6-all afer 34 minutes.

Mounties had completed 5 sets from 13 at this stage but Newtown had failed to take full advantage of the consequent possession and Territory.

Penalties 4-1 to Mounties so far.

Good defence by Newtown in the next set keeps Mounties out

Newtown had completed 5 from 15 at this stage, plus had been tackled out twice and had not found the line from a penalty kick.

Newtown has let Mounties back into the contest late in the first half.

Newtown on the attack early in the second half but once again handling lets them down close to the Mounties line.

It’s becoming apparent that it’s a waste of time putting up high kicks to PNG international Kato Ottio – catching high kicks is his stock in trade.

Greg Matterson says his players “aren’t playing enough footy” – in other words, they need to be more creative and expansive

Josh Cleeland cuts through and hurls himself at the line, but referee Jeff Hartup rules he bounced it. (71st min) After the game Cleeland is adamant he grounded the ball on the chalk and several team-mates are also certain.

Oh for the Bunker to be the final adjudicator in the ISP NSW!

Travis Robinson penalised for a shepherd in the 73rd min, 30 metres out from his own line.

Hartup’s decision is viewed as controversial to say the least.

Cameron Phelps kicks the penalty goal for Mounties to lead 14-6 in the 74th min.

Neither side has played to their full ability today because of errors, but the fierce defence and prolonged high-pressure has given the game an almost macabre intensity.

Newtown stages a high speed raid up their left side but Kato Ottio takes an audacious intercept and sprints 90 metres to score, chased all the way and forced to touch down out wide by Matt McIlwrick and Jaline Graham.

The try is not converted and Mounties lead 18-6.

Josh Cleeland breaks through to score in the last minute of play and Nu Brown converts.

Both 50% registrations, remarkably low for this level of Rugby League.

“Don’t discount the ferocity of the defence by both teams.

This undoubtedly contributed to a certain amount of lost ball.

Two or three blokes smashing into you simultaneously makes it somewhat hard to hold onto the ball.”

Both teams sized each other up, rather like two capable boxers expecting to meet each other again later in the year.

There was no score in the second half until the 74th minute.

Kurt Dillon might have a broken thumb which will sideline him for many weeks.

Ground announcer John Lynch praised Malakai Houma’s contribution. He said that big Malakai added a bit of sting and go-forward to the Jets forwards. He also rated the performances of Josh Cleeland and Kurt Capewell highly.

One Newtown supporter, aware that Kurt Capewell hails originally from Charleville in far western Queensland, said that “Capewell looks to me like one of those hard bastard Aussie soldiers who defeated the Japs up on the Kokoda Track!”

Well done to the 2500 plus Newtown Jets who turned out to support their local team in this big match, and who paid tribute to all the women in Rugby League in a suitable manner. The Jets fans also contributed generously in the collection for Vinnies’ Elsie Women’s Refuge.