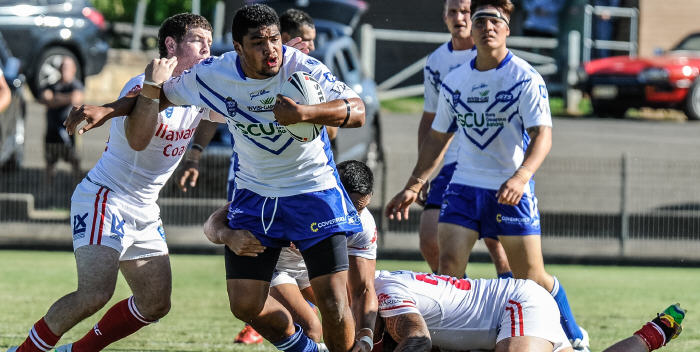 There's no such thing as two many Houma's! Malakai Houma (younger brother of Saulala) impressed in his first outing with the Jets. PHOTO: Gary Sutherland

A Hot Afternoon’s Work for the Young Jets

The Newtown Jets fielded a relatively inexperienced line-up for their first NSW Cup trial match for 2015, which was played in warm conditions against the Illawarra Cutters at Henson Park last Saturday.

Twelve of the more experienced and higher-profile Jets players had been called up into the Cronulla Sharks NRL trial team that played Manly-Warringah on Saturday evening at Narrabeen. The Jets youngsters at the Henson Park trial were well led by front-row veterans Ray Moujalli and Andrew Pearn.

The Illawarra Cutters ran on a trial team with considerably more NRL and NSW Cup playing experience. The youthful Jets still made a real contest of it, leading 8-4 after twenty minutes and the scores were locked up at 12-all after forty minutes of play. The Cutters dominated in the third session and capitalised on Newtown’s errors, and led 28-12 after sixty minutes.

By agreement between the two sets of coaching staff and taking into account the hot playing conditions, the match finished after sixty minutes had elapsed. Jets head coach Greg Matterson and his staff were generally pleased with how the trial panned out and that the younger Jets triallists had the opportunity to press their claims for future selection.

The Jets play North Sydney in another NSW Cup trial game at Henson Park on Saturday, 14th February with this game timed to start at 6.00pm.

The Illawarra Cutters team was:

Here are the Newtown Jets pre-season squad members who were called up into the Cronulla-Sutherland Sharks NRL trial team that played Manly-Warringah at Pittwater Rugby Park on Saturday evening: