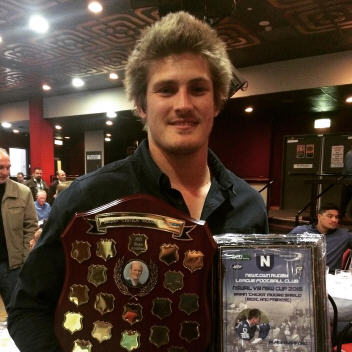 Blake Ayshford takes out the inaugural Brian “Chicka” Moore Shield, in being named as the recipient of the 2015 Newtown Jets VB NSW Cup Best and Fairest award.

A good crowd of sponsors representatives, club members, officials, supporters, players and family members was on hand at the Petersham RSL Club on the evening of Wednesday, 23rd September for the 2015 Newtown RLFC Annual Presentation Dinner. Dignitaries present included David Trodden (CEO of the NSW Rugby League), Lyall Gorman (Group CEO of the Cronulla-Sutherland Sharks) and other Sharks club identities, Marrickville Councillors Morris Hanna, Victor Macri and Chris Woods and the NRL Rugby League Museum Historian (and author of two books on the history of the Newtown RLFC), Terry Williams.

The award winners on the night were as follows:

The blue riband Newtown RLFC VB NSW Cup Best and Fairest award and the winner of the inaugural Brian “Chicka” Moore Shield, Blake Ayshford. Blake turned in a number of outstanding displays for Newtown during the 2015 season, and will soon be off “across the Ditch” to take up a new contract with the New Zealand Warriors RLFC. Everyone at the Newtown RLFC wishes Blake and his family well for the future, and we thank him for his top quality season at Henson Park.

The prestigious Fred Daly Memorial Shield, awarded to the player judged to have made the best contribution to the club on and off the field in a variety of criteria, was the popular Andrew Pearn. The big front-rower has had four seasons with the Jets, 2012-2015, and won a VB NSW Cup premiership-winner’s medal in 2012. Andrew has played more than 200 VB NSW Cup games with several clubs over the years and will be taking up a playing deal with Wentworthville in 2016. We all wish Andrew and his family the very best for the future and he is sure to continue to contribute to the Rugby League game in a positive way for years to come. Andrew also received a Long Service Award for his seasons at Newtown from 2012 to 2015.

The Players’ Player Award went to Kurt Kara, who has been a fixture in the Newtown forward pack since 2011. Kurt also received an award for reaching the 100 NSW Cup games with Newtown milestone in 2015.

The Coach’s Award was made to Mitch Brown. Jets head coach Greg Matterson praised Brown’s professionalism and positive attitude and said his experience was a huge asset to the team.

The Most Consistent Player award went to the Fijian international backrower Junior Roqica. Junior became quite a crowd favourite at Henson Park in 2015 and was one of Newtown’s best attacking players right throughout the season.

Malakai Houma was the winner of the Most Improved Player award. Malakai is the younger brother of Saulala Houma, who has been an NRL squad member with both the Roosters and the Sharks and has given tremendous service to the Jets. Malakai was spotted by Greg Matterson playing with the Mt Albert Lions in the Auckland-based Fox Memorial Shield competition in 2014, and he turned in some powerhouse displays as a backrower in the latter weeks of the 2015 season. Greg Matterson says that Malakai is one to watch in 2016.

Kurt Kara also reached his 100 VB NSW Cup games with Newtown milestone this year, having played with the club from 2011 to 2015.

A new award, the Newtown Members’ Player of the Year (where 2015 Newtown Jets members voted for their own choice of player of the year), was a tie between Kurt Kara and Andrew Pearn.

The leading Newtown points scorer in the 2015 VB NSW Cup competition was Todd Murphy, with 10 tries and 37 goals for a total of 114 points.

The leading Newtown Jets try-scorer in the 2015 VB NSW Cup competition was Sami Sauiluma, with 12 tries.

Other awards made on the night were:

Several speakers, including Stuart McCarthy and the Jets President, Barry Vining, thanked our NRL partners, the Cronulla-Sutherland Sharks RLFC for being Newtown’s NRL partners in the VB NSW Cup and for helping to make the first year of this new partnership work so effectively and smoothly.

Mr David Trodden, CEO of the NSW Rugby League, addressed the crowd and made very generous remarks about the great value that the Newtown club provides to the VB NSW Cup competition. He noted that the Jets draw the biggest crowds in the competition, turn on the best game-day experience in the NSW Cup and set the benchmark for other clubs to follow in terms of sponsorship, promotion, merchandising and media activities.

Mr Lyall Gorman, the Cronulla-Sutherland Group CEO, said in his address that the Cronulla Sharks admire the terrific work done by so many people at the Newtown club, and that the Sharks place great value on their VB NSW Cup partnership with the Jets. Several Jets speakers also congratulated the Sharks on their successful 2015 season, especially for having made great advances up the NRL competition table into the finals and for having drawn some huge crowds to Remondis Stadium.

Stuart McCarthy also thanked those Newtown Jets staff members who he works with so closely in taking the Newtown RLFC narrative to the world on an ongoing basis.

The following players, some of whom admittedly only appeared with the Jets on a few occasions before gaining NRL selection with the Cronulla Sharks, attained representative honours during 2015 or leading into the 2015 season:

One of Newtown’s trio of high performance photographers, Gary Sutherland, has provided these photos from Wednesday night for your perusal: http://www.pbase.com/gsphotography/newtown_presentation_2015&page=all

Tough backrow forward Tinirau Arona, one of the genuine NRL good guys, played with the Jets on many occasions between 2010 and 2013 when he was contracted to the Sydney Roosters. He also played on a few occasions with the Jets in 2015 as part of his contractual arrangements with the Cronulla Sharks. “T” has played in several Rugby League internationals with his country of heritage, the Cook Islands, including the 2013 Rugby League World Cup. Tinirau has now been named in the Cook Islands train-on squad for the 2017 World Cup qualifying match to be played between the Cook Islands and Tonga at Campbelltown Stadium on the evening of Saturday, 17th October: http://www.asiapacificrl.com/2015/09/25/cook-islands-train-on-squad-named/

The physically-imposing Houma brothers, Saulala and Malakai, and hooker Pat Politoni (who all played with Newtown in 2015), have been named in the Tongan Rugby League train-on squad that will prepare for the match with the Cook Islands on the 17th October, a game that will determine which of the two nations goes to the 2017 Rugby League World Cup: http://www.nrl.com/tonga-named-preliminary-train-on-squad/tabid/10874/newsid/90108/default.aspx