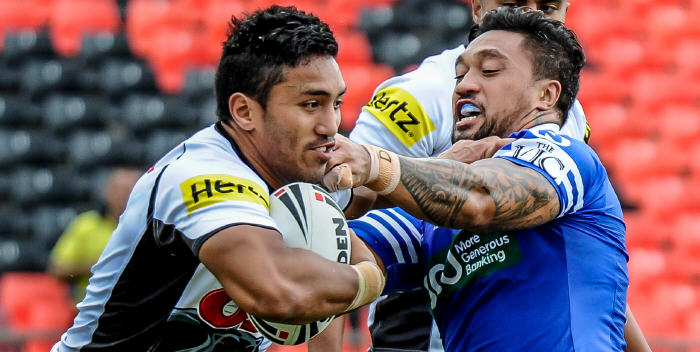 And now the Jets get down to business ….

The Newtown Jets won their first game in the 2015 NSW Cup, with a solid 24-8 victory against the previously-unbeaten Penrith Panthers at Pepper Stadium on Saturday. The Jets led 8-0 at halftime and only secured this victory in the last eight minutes.

Newtown fielded a team reinforced by plenty of well-credentialled Cronulla NRL squad members, but were up against an in-form and confident Panthers line-up. The match was a full-on contest with the Panthers having a player sent off in the 26th minute. Jets fullback Nathan Gardner was taken from the field after this incident, which led to a considerable reshuffle of the Newtown backline and disruption to the Jets interchange plans. Penrith had another player sin-binned with ten minutes left to play in the second half.

This was an important win for the Jets, with several players showing outstanding form and the Newtown team as a whole displayed great resolution in defence and determination to win. Both teams had high completion rates and possession was shared evenly throughout most of the game. The Panthers had a slight edge in penalties despite finishing the game with eleven players. The match was certainly a good advertisement for the NSW Cup in what is shaping up as a hard-fought and even competition.

Hard-running centre Sami Sauiluma, who was the top try-scorer in the 2014 NSW Cup competition, scored for Newtown in the 8th minute and fellow centre Jack Bird showed class and speed when he scored wide out in the 23rd minute. The Panthers put the Newtown defence under pressure several times in the first half but the Jets defensive line held firm.

The Panthers monopolised possession for several consecutive sets early in the second half and posted their first points with an unconverted try in the 49th minute. Jets centre Jack Bird and winger Jacob Gagan combined well to send halfback Todd Murphy in to score right on the 60th minute mark. The Panthers stayed in the contest when they scored wide out in the 66th minute to trail 12-8. The numbers game eventually told when the Mountain Men lost a second player through a sin-binning with ten minutes remaining, with further tries to the Jets coming through giant prop Saulala Houma and a second try to Sami Sauiluma.

Newtown’s coaching staff rated Tinirau Arona, Tim Robinson and Blake Ayshford as the best of a well-performed forward pack, while Jack Bird and Todd Murphy were the stand-outs in a backline that coped well with several enforced positional changes. The former Brisbane Norths halfback Murphy continues to show top form for the Jets, with two try-assists and a line-break to complement his own try. Coach Greg Matterson said that despite the Panthers being short-handed, this had been a really hard-fought and meritorious win for the Jets. He said all the players could take a lot of positives out of how this game had been played and won, and that there is plenty to build on in the upcoming weeks.

Because of the unfortunate state of Brookvale Oval, the Newtown Jets travel away to Leichhardt Oval next Saturday, 28th March, when they play Manly-Warringah Sea Eagles, with this fourth round NSW Cup match now rescheduled to kick-off at 5.00pm.