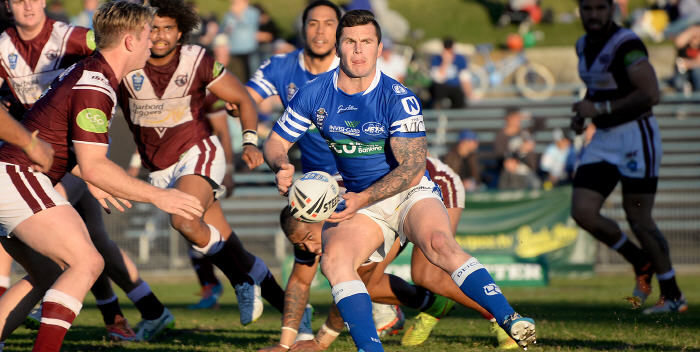 New signing Gerard McCallum (with the ball) impressed on his debut with the Jets at Henson Park on Saturday against Manly-Warringah. Photo: Mike Magee Photography.

Report on the 16th Round NSW Cup match between Newtown and Manly-Warringah, played at Henson Park on Saturday, 27th June 2015 by Glen ‘Bumper’ Dwyer.

A dominant second half display gave the Newtown Jets a confidence-boosting win when they defeated Manly-Warringah 28-20 in the 16th Round NSW Cup match played at Henson Park on Saturday afternoon. The Jets trailed 14-12 at half-time, but lifted their performance in several key match indicators in the second half to secure two badly-needed competition points.

A big home crowd and perfect playing conditions saw the Jets start this match with plenty of energy, and they scored in the third minute through fullback Nathan Gardner in the south-eastern corner. Gardner converted his own try from wide out to give Newtown a 6-0 lead. Manly had more of the ball for an extended period in the first half, during which their completion rate was higher and they spent more time in Newtown’s territory. The Sea Eagles scored two converted tries and led 12-6 after 27 minutes. The Jets regained some momentum and five-eighth Nesiasi Mataitonga scored when he won the contest for a bouncing ball inside the Sea Eagles’ in-goal. Manly led 14-12 at the break after kicking a penalty goal in the 39th minute.

Both teams made errors early in the second half as they tried to establish supremacy. The big Jets forwards started to roll forward and make ground up the midfield. Quick hands to the right-side saw Corey Brown score for the Jets right in front of the partisan crowd on the north-eastern hill. Halfback Dallas Wells defused a dangerous situation when he caught a high kick under considerable pressure in the Jets in-goal. His quick restart and Nathan Gardner’s dash upfield ended in backrower Sami Sauiluma scoring near the posts. Gardner’s conversion extended the Jets’ lead to 22-14.

Newtown looked to have secured the win when their on-debut utility back Gerard McCallum scored after first-class approach work by Nathan Gardner and Corey Brown. The Sea Eagles added a converted try late in the second half to make the final score 28-20 in the Jets’ favour.

Jets coach Greg Matterson gave his team a mixed review after the game. He described their display as being rusty in patches, especially in the first half. Their best football had been in the second half with determined running and intelligent support play. The team was clearly motivated by being back at home and playing in front of a big audience. There was plenty of talk and energy on the field, especially as they gained control in the second half.

Experienced backrower Tinirau Arona and front-rowers Ray Moujalli and Tim Robinson were the best of a hard-working set of forwards. The two players on debut, Corin Smith (ex-Mudgee Dragons) and Gerard McCallum (ex-Canterbury NYC and French Rugby) impressed with their enthusiasm and direct running.

The Jets have another bye this coming weekend (4th and 5th July), and then in Round 18 are drawn against the in-form Canterbury-Bankstown at Henson Park on Saturday, 11th July.