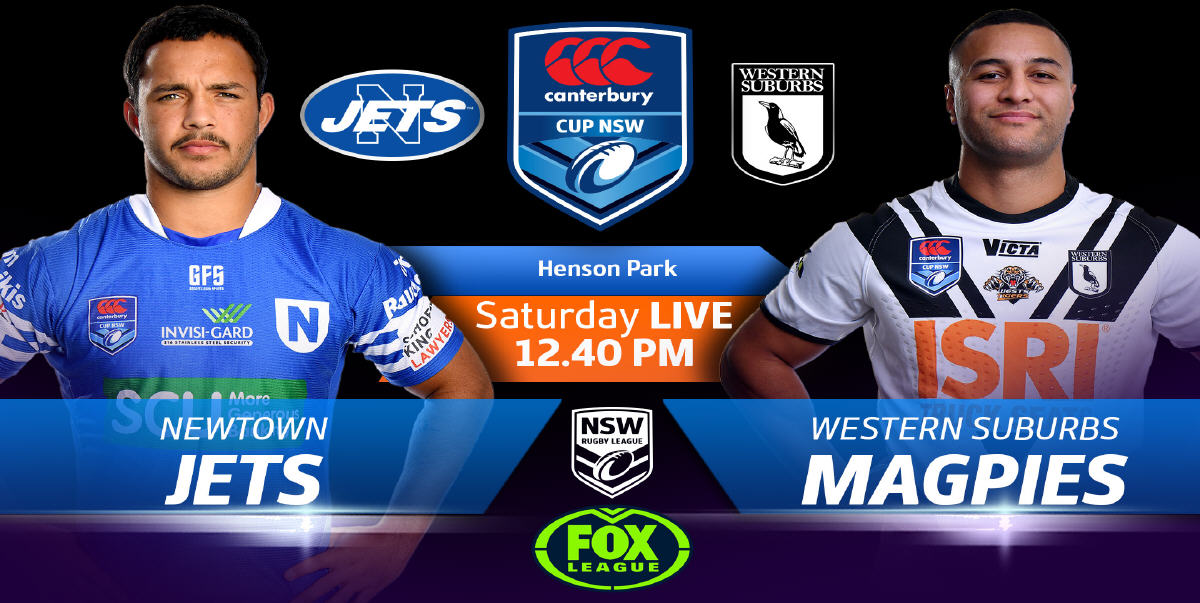 The Newtown Jets and Western Suburbs Magpies clubs head into Saturday’s 23rd round Canterbury Cup confrontation with a place in the competition’s top eight on the line. The Jets are in 7th position on 21 points and Wests are in 10th place and only two points behind on 19. In fact second tier rugby league doesn’t get any better than this – two foundation clubs, both 111 years old and with amazing club histories, shaping up for a match that may well decide which of these two clubs will make the finals.

On top of this, Saturday’s game is the deciding match in the 2019 Tom Raudonikis Cup series (the Magpies are one-up having beaten Newtown 32-22 back on the 28th April).

Please note the early kick-off time of 12.45pm; this match is being televised live on the Fox League channel).

This match is being televised live on the Fox League channel and is also being broadcast live by Steele Sports.

There are two other games being played at Henson Park this Saturday.

The Western Suburbs Magpies team is:

These packages will be available at the Newtown Jets merchandise outlets at Henson Park on Saturday. You can also ring Olga on 1300 36 36 90 and arrange to pick up your package from the Newtown RLFC administrative office at 14 Rich Street, Marrickville during business hours; or if you’re buying online get your order in quickly so your package can be processed and posted early next week.

Check out the Father’s Day package on: www.newtownjetsclothing.com.au

Taking It To The Streets – The Second Life of the Newtown RLFC has been receiving complimentary comments from those persons who have already bought the book and read it, plus Phil Gould gives the updated club history a favourable mention on his latest Six Tackles With Gus podcast, available on: https://wwos.nine.com.au/podcasts/six-tackles-with-gus . Tune in at the 42nd minute 35 seconds mark to hear Phil Gould’s considered opinion.

There’s a feast of footy, Retro Style, this Saturday at Henson Park so bring your friends and family, wear your favourite Retro club jersey and cheer on the men all dressed in blue whilst enjoying one of the most unique sporting experiences Sydney has to offer.