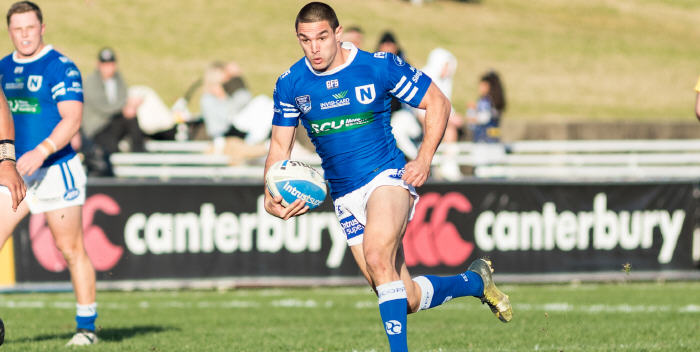 Newtown Jets halfback Luke Towers is about to put on a step at Belmore on Saturday afternoon that showed why he was the Toast of the French Rugby League in recent seasons. Photo: Mario Facchini (MAF Photography)

Bulldogs dish out a mauling to Newtown at Belmore

Details of the 22nd round ISP NSW match between Canterbury-Bankstown and Newtown, played at Belmore Sports Ground on Saturday, 5th August 2017.

The Newtown Jets were punished for a series of defensive lapses in Saturday’s match against the Canterbury Bulldogs at Belmore Sports Ground. The score was 6-all after 30 minutes in the first half, but the Dogs then scored five converted tries in the twenty minute period before and after the half-time break. The Jets rallied to pull back to 36-20 midway through the second half, but this just wasn’t going to be a day for death-or-glory comebacks like against Penrith at Allianz in July 2014 or last year’s phenomenal Reunion Day fightback against Manly-Warringah at Henson.

Bulldogs kicked off to the northern end of Belmore Sports Ground (northern end).

Kick-off not secured and Canterbury get the ball and then lose it in their first set.

Pen to Newtown in 2nd minute.

(Popular Newtown Jets supporter Wayne Leong is in full voice and can be heard all around the ground!)

4th min: Perfect grubber kick by Joseph Paulo towards the posts, Dogs miss it and it is safely grounded by Kurt Dillon. Big Kurt therefore celebrates his 50th game with Newtown with a try

6th min: Another good kick by Paulo in behind the Dogs backline.

They are caught with the ball close to their own try-line.

Another penalty to Newtown in the 7th min.

Jets give a penalty away in 9th min when they had possession.

10th min: Dogs on the attack and they lose the ball over Newtown’s try-line

13th min: Dogs cut through to score to the right of the posts (Rhys Martin the try-scorer)

He converts his own try. 6-all

Pen to Newtown on halfway in 20th min

Jets lose the ball in the next set

Now the Dogs lose the ball in their next set

Dogs starting to look more confident and aggressive when in possession

32nd min: Josh Cleeland breaks through several tackles to score to the right of the posts

37th min: Dogs score out near the NE corner

Martin the try-scorer and he converts his own try again

Newtown kick off to the railway end.

Dogs make a long break in the first set and score in SE corner.

Converted from the sideline by Kerrod Holland.

A dreadful start for Newtown who had been given the half-time directives of defence and discipline.

Jets get back on the attack inside Canterbury’s 20 m zone, but a stray pass leads to a 95 m try by Dogs centre Reimis Smith

(In the space of 20 mins from before and after the half-time break, Canterbury has scored 30 unanswered points, 5 converted tries)

On the back of a penalty, Paulo kicks into the Dogs in-goal and Edrick Lee scores 10 m in from the NE corner

Pen to Jets 5 m out from CB try-line

Are we going to see another miracle fightback?

Jets lose ball in 6rd min which might blunt their momentum.

Holland converts and the Dogs lead 42-20 in 68th min, presumably ending the contest

Jets on the attack again and a cross-field kick into the NW corner is tapped back in side.

Paulo makes ground and kicks ahead

Leigh Higgins in pursuit is fouled off the ball, pen to Jets in 75th min

Nothing comes from the ensuing set

There will be a jumping castle, pass the ball competitions, Mr Whippy van, face painting and of course Syd the Pig and Jetman will be there.

Beautiful weather is forecast so get the kids down to Henson Park for another fun-filled afternoon!