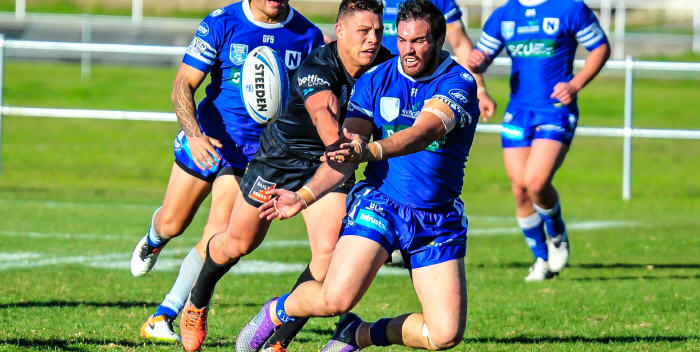 Newtown’s tough as nails and very skilful backrower Jason Schirnack gets his pass away last Saturday despite the attentions of this Mounties defender. Photo: Gary Sutherland Photography

Can the Newtown Jets stay in the chase for a top four finish – and can they secure the Frank Hyde Shield for 2016 at Henson Park this Saturday?

Two of Rugby League’s 1908 Foundation Clubs meet at Henson Park on Saturday – and members of the Hyde family will be there in force to see the deciding match in this year’s Frank Hyde Shield series.

When Newtown and North Sydney clash, whether it is at Henson Park or North Sydney Oval, they provide two of the marquee occasions of the entire NSWRL Intrust Super Premiership NSW season. The Jets must win on Saturday to stay in the quest for a top four finish and the double-chance in the upcoming ISP NSW finals, while the Bears must win to remain in the hunt as one of five clubs battling for the last two places in the top eight. For both clubs, winning the annual Frank Hyde Shield series is a matter of great pride. Frank Hyde remains one of the most admired and respected names in the history of Australian sport, and both the Newtown and North Sydney Rugby League clubs are immensely proud to claim Frank as one of their most honoured ex-players.

Here is the ISP NSW competition table after 23 rounds:  http://live.nswrl.com.au/comp/197

And here is how the NSWRL media team has previewed all the games in Round 24 of the ISP NSW:  http://www.nswrl.com.au/news/2016/08/17/previews_intrust_sup.html

This Jets match report and action photo were on page 15 of the Cooks River Valley Times for Wednesday, 17th August:  http://bit.ly/2b15F2q

And from Mario Facchini: http://mafphotography.blogspot.com/2016/08/intrust-super-premiership-2016-round-23.html?spref=tw

Jamie Soward was in top form for the London Broncos when they crushed the Gallant Youths of Batley 76-16 in Round Two of the UK Super Eights Qualifiers played last weekend. Jamie scored a try, kicked ten goals and was praised by his coach Ian Henderson for his quality game management.

Last week’s quiz was won by Michael Taylor, who was actually in attendance at the 1966 first semi-final between Newtown and Manly-Warringah at the SCG. Dick Poole was the Newtown coach, and four of the most commonly mentioned players who played with Newtown in 1966 were Brian “Chicka” Moore, Bobby Keyes, Graham Wilson and Paul Quinn.

Twenty years ago Newtown won the 1996 NSWRL Metropolitan Cup first grade premiership when they defeated Ryde-Eastwood 28-16 in the Grand Final at Parramatta Stadium. Colin Murphy coached the team. The first correct entry emailed to jets@newtownjets.com that names any six of the 17 Newtown players named in that 1996 Grand Final team will receive an item of top quality Newtown Jets merchandise.