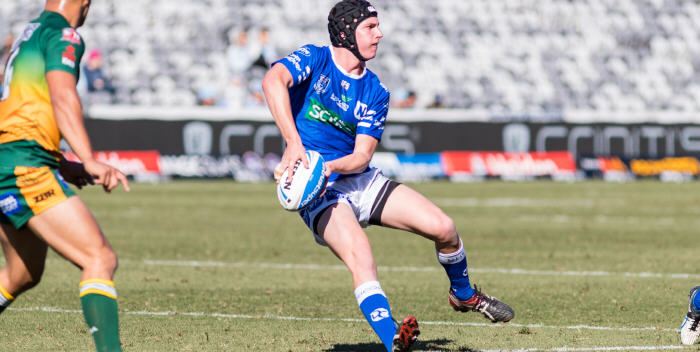 Newtown halfback Lane Ferling made his debut for the Jets against Wyong at the Central Coast Stadium, Gosford on Saturday. Photo: Mario Facchini (MAF Photography)

Competition leaders Wyong Roos had too much firepower for the Jets

The Newtown Jets’ makeshift team line-up competed gamely but in the end was no match for the front-running Wyong Roos on Saturday at Gosford. The Jets have undergone a number of team changes due to mid-season player transfers, injuries as well as retirements. Wyong led 24-6 at halftime but the Jets staged a brave rally in the game’s third quarter, scoring two tries to trail 24-14 with twenty minutes left. The Roos kicked back late in the game and scored four converted tries to run out winners by 48-14.

The Jets fielded several new faces in their team on Saturday, including Cook Islands international and winger Reubenn Rennie, formerly with Canterbury and Canberra, who was on debut with Newtown. Halfback Lane Ferling was on loan from the high-flying Cronulla Sharks Holden Cup team and utility forward Blake Judd had transferred in from South Sydney. Wyong are the Intrust Super Premiership partnership club of the Sydney Roosters, and after seventeen rounds are now eight points clear of their nearest rivals on the premiership table.

Best players for Newtown on a tough day were front-rower and captain Kurt Dillon, who is proving to be one of the most consistently reliable performers in this competition. Hooker turned five-eighth for the day Kurt Kara was also one of the Jets’ best and he scored a clever try. Young centre Jesse Ramien scored two tries and once again presented his credentials as a future NRL player. Reubenn Rennie made some strong carries with the ball and looks to be a most willing competitor.

The Jets return home to Henson Park this Saturday, 8th July, when they play Wentworthville Magpies, who are the ISP NSW partnership club to the Parramatta Eels. This 18th round ISP NSW fixture is set down for a 3.00pm kick-off.