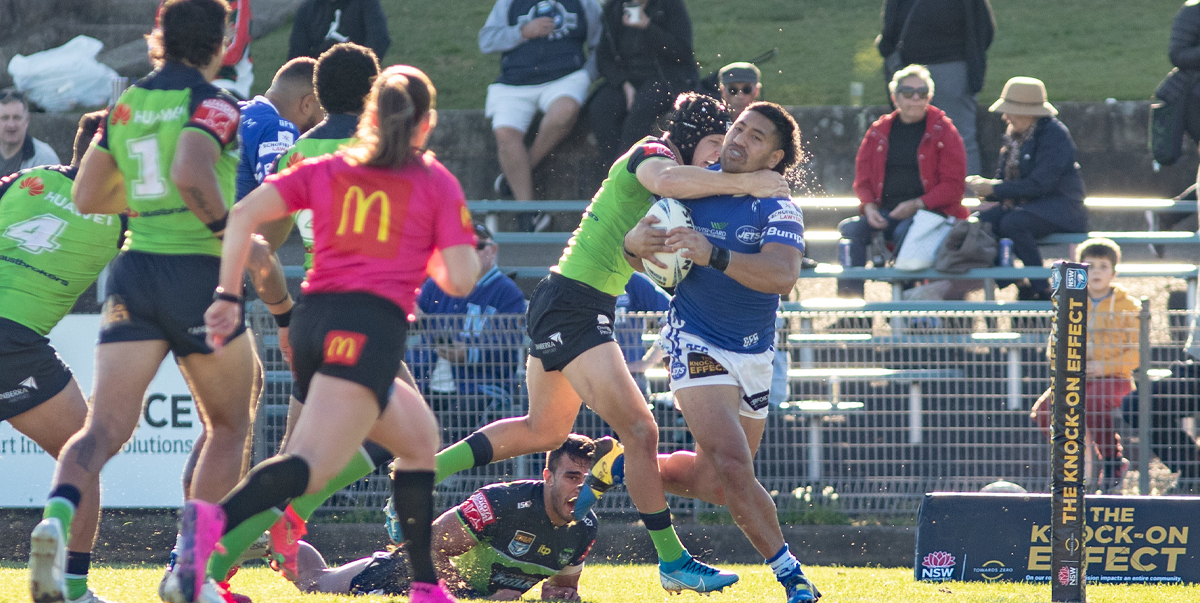 Photo caption: Jets winger Edward Aiono is on the receiving end of a high one from a Raiders defender, as he charges in to score Newtown’s first try on Saturday at Henson Park. Photo: Mario Facchini, mafphotography

Competition Points get Away From Jets in the Final Twenty Minutes.

The Newtown Jets lost a hard-fought match to the Canberra Raiders by 20-10, in the Knock-On Effect (KOE) NSW Cup 13th round fixture played at Henson Park on Saturday afternoon.

The Raiders led 12-6 at half-time and Newtown had pulled back to trail 12-10 with just twenty minutes left to play. Jets five-eighth Luke Metcalf’s conversion attempt bounced away off the left-hand upright.

The Jets had toiled bravely to get back to what could have been a winning position, but Newtown’s overall performance declined just when they needed to choose better attacking options and to work with more patience when in possession.

Newtown’s first half try had been a determined effort in the northern left-side corner by winger Edward Aiono, with Luke Metcalf converting from the sideline. Rugged second-rower Siosifa Talakai blasted his way through the Raiders defence to score in the 60th minute.

Coach Greg Matterson noted after the game that his players needed to take smarter options in attack when they were under pressure. The Jets had not quite known in that last twenty minutes how to best take control of the game when it was there to be won.

The Raiders had drawn clear of Newtown through tries scored in the 68th and 74th minutes. Canberra’s last try was scored by veteran forward Iosia Soliola, who had played for Newtown against the Raiders when they last visited Henson Park back in 2007.

The Raiders had obviously done their homework as to who Newtown’s danger-men were, with players such as Nene Macdonald, Bronson Garlick, Billy Magoulias, Siosifa Talakai and Franklin Pele being closely marked all afternoon.

The Jets are back again at Henson Park this coming Saturday, 12th June, when they confront the KOE NSW Cup competition leaders, Penrith Panthers, with the kick-off timed for 3.00pm.