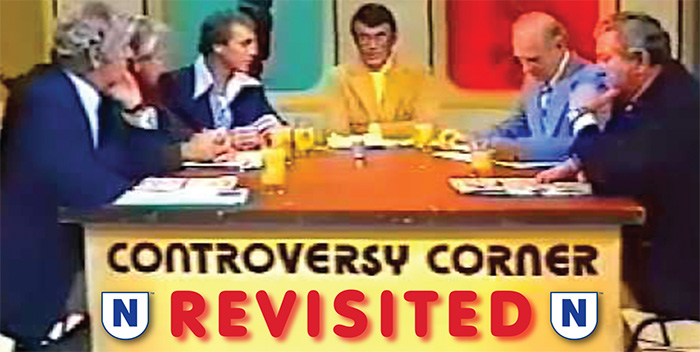 It’s back to the 1970’s and 80’s as the Newtown Jets stage Controversy Corner Revisited ….

Where: Petersham RSL Club, 7 Regent Street, Petersham. (This is a terrific venue with superb facilities and catering. There is plenty of parking nearby and Petersham Station is close at hand).

Only an “out there” club like the Newtown Jets could come up with such an innovative concept of reviving (for one night only!) the famous Channel 7 Rugby League panel show that was hosted by the completely overbearing and over-the-top Rex Mossop accompanied by an array of argumentative sidekicks.

This is sure to be an evening of cracking entertainment and as with any Newtown Jets function, good Rugby League company and camaraderie is assured.

All Newtown Jets members, supporters and friends should note that functions like this are the financial lifeblood of the Newtown RLFC. This is one of the ways the club raises the money to keep this famous old club alive and competing in a high standard Rugby League competition like the VB NSW Cup.

This is a direct appeal for you to attend this function, to round up your friends and fellow Jets supporters to put a table together for the night, and also to spread the word about this function far and wide.

You can obtain more information about Controversy Corner Revisited by utilising this link: http://www.newtownjets.com/

Here’s a clip of Rex Mossop in one of his less dignified moments as a Rugby League commentator: http://www.youtube.com/watch?v=eMK3291XpCc

For those of you who missed this article in the most recent Sunday Telegraph, Newtown Jets stalwarts Barry Vining and Terry Rowney have received nominations for the prestigious Spirit of Australia community service awards for their sterling efforts in keeping Australia’s oldest Rugby League club alive. Here is the link to the article: http://bit.ly/1jjmjh4

Feel free to post your comments in the space provided at the foot of this Sunday Telegraph article. It will be not only your way of paying tribute to the outstanding work done by Barry and Terry over the past 30 plus years, it is also your chance to make abundantly clear what an important part of our social fabric and Sydney’s history the Newtown Rugby League Football Club really is.

The Newtown Jets ace ground announcer John Lynch was stunned at the size and power of the Melbourne Storm-contracted player Nelson Asofa-Solomona who turned out with the Cronulla Sharks at Henson Park last Saturday. Asofa-Solomona is 18 years old, 6 feet 8 inches tall and weighs 120 kilograms. Lynchy came out with this classic line: “This big bloke’s long enough to be continued!”