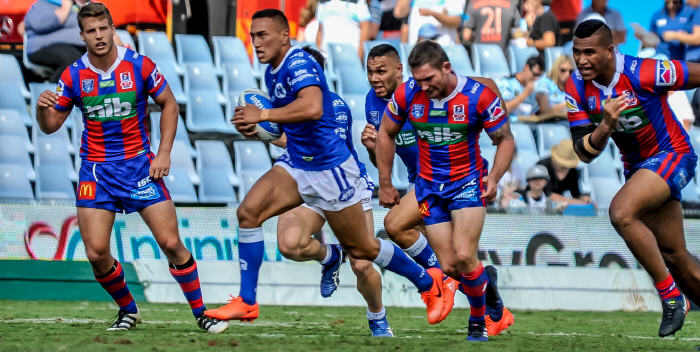 The Newtown Jets fielded a strong side against the Newcastle Knights at Southern Cross Stadium on Saturday, but in what has to be described as a disappointing display lost the game 28-18. The Jets had several players with extensive NRL and international rugby league experience in their ranks and on paper were favourites to win. The Knights had other plans and were obviously fiercely motivated to break away from the bottom end of the competition table.

Newtown’s defence in the first half was rather suspect and they conceded four tries, with the Knights running up a 22-8 halftime lead. Backrower and former Australian Test player Tony Williams had ploughed his way through the Knights defence in the tenth minute to score Newtown’s only try in the first half. The Jets scored two more tries in the second half through lock Joseph Paulo and winger Jordan Drew, and pulled back to trail 22-18 with seventeen minutes remaining. Jets halfback Fa’amanu Brown’s soaring conversion attempt from the left sideline struck an upright and bounced away, which would have narrowed the margin by a further two points. As coach Greg Matterson noted after the game, “we had enough ball, field position and scoring chances in the second half to have won two games. We were our own worst enemy on Saturday”.

Whether there was any complacency on Newtown’s part in the first half was surely blown away by the tigerish determination shown by the Knights in both attack and defence. The Jets were guilty of too much sideways running and not linking with players who were better positioned in attack. Centre Jesse Ramien and Edrick Lee (on debut for Newtown) went desperately close to scoring in the second half, but it was the Knights who scored a try against the run of play with eight minutes left that took them out to a match-winning ten point lead.

The Jets wing across the Tasman next weekend to play the undefeated New Zealand Warriors at Mt Smart Stadium, Auckland on Sunday, 9th April. This sixth round Intrust Super Premiership match is timed for kick-off at 11.45am (AEST) and is expected to be televised live on Fox Sports.