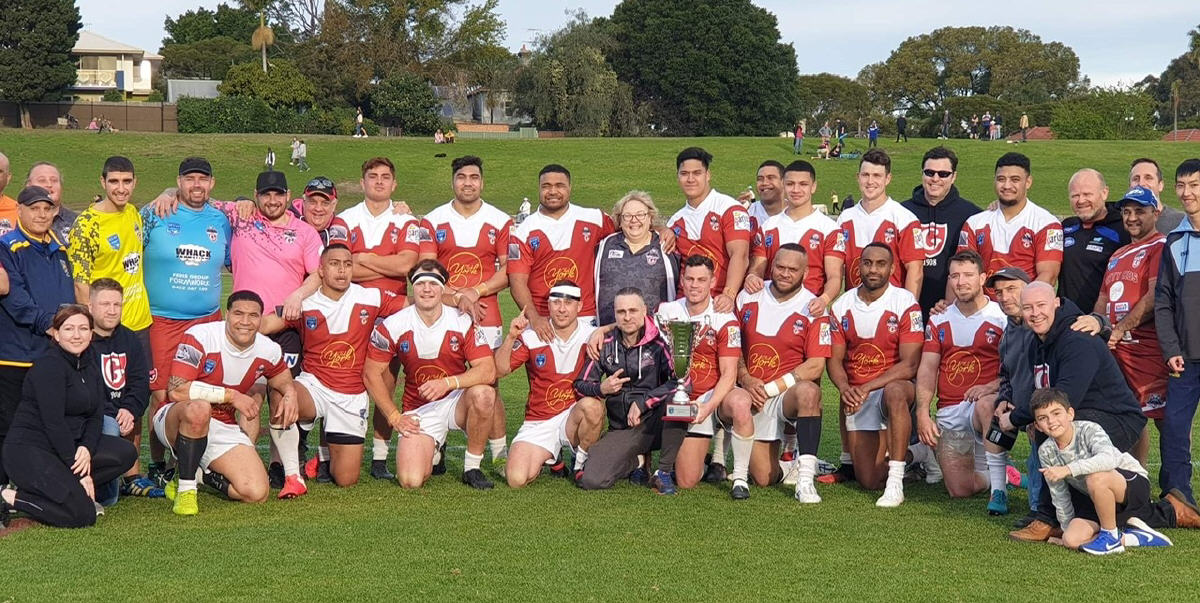 From out of the pages of rugby league’s history – the Glebe Dirty Reds players and staff celebrate their crushing 53-16 victory over Wentworthville in the NSWRL Challenge Cup Final played at Henson Park on Sunday. Photo: Supplied by the Glebe RLFC

The NSW Rugby League’s Canterbury Cup competition might have been cancelled for 2020, but rugby league has returned to Newtown’s home ground Henson Park on the past two weekends.

On Saturday, 25th July the Glebe Dirty Reds defeated North Sydney 16-12 at Henson Park in a second round match of the newly-formed NSWRL President’s Cup. This competition is made up of Ron Massey Cup clubs and selected country rugby league teams.

The Glebe Dirty Reds claimed their first rugby league silverware in 93 years when they easily accounted for Wentworthville 53-16, in the final of the NSWRL Challenge Cup played at Henson Park on Sunday, 2nd August. The Challenge Cup is a knockout tournament played between city and country clubs, with the qualifying rounds having been played back in February and March. Last Sunday’s Glebe-Wenty match was also the third round of the President’s Cup.

Sunday’s tearaway victory was a day of high emotion for Glebe supporters whose club has had an extraordinary history. The original Dirty Reds played in the NSWRL first grade competition from 1908 to 1929 when they were controversially expelled from the league. The club was re-established in 2016 and Sunday’s Challenge Cup triumph is the first trophy won by the Dirty Reds since winning the NSWRL third grade premiership title in 1927.

The Dirty Reds play away to the Hills District Bulls at Crestwood Oval (Baulkham Hills) on Sunday, 9th August at 3.00pm.