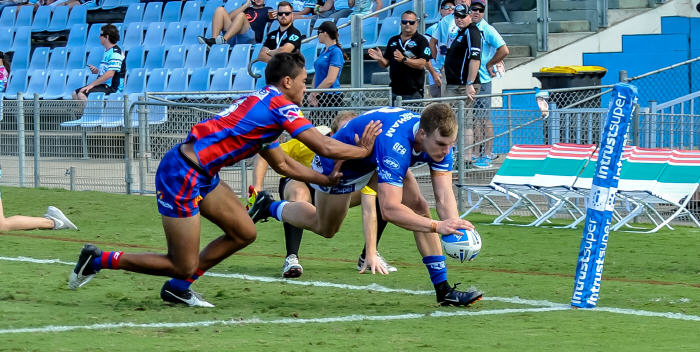 Jordan Drew scores for the Newtown Jets in the second half of last Saturday’s game against the Newcastle Knights at Southern Cross Group Stadium. Photo: Gary Sutherland Photography

Disappointing showing by the Jets as the Knights prevail

This fifth round ISP match against the Newcastle Knights was in effect Newtown’s first home game of the year, but it had to be played at the Southern Cross Group Stadium (Cronulla’s home ground) to accommodate the Fox Sports live television infrastructure requirements. The Jets fielded a strong line-up but their best-laid plans were overturned by a very determined Knights outfit.

This match was shown live on Fox Sports.

Newtown running to the southern end of the Southern Cross Group Stadium.

Penalty at the Knights end gave Newtown extended possession.
10th min: Try to Tony Williams to the left of the southern end goal posts.
Converted by Nu Brown 6-all.

15th min: Jaelen Feeney scores to the left of the posts.
Converted by Gudgeon.
Knights lead 12-6.

Newtown has several repeat sets at the Knights but can’t crack their defence.

63rd min: Jordan Drew scores in the north-west corner.
Nu Brown’s conversion attempt from the left sideline bounces off and away from the left-hand upright.
Knights lead 22-18.

Jesse Ramien and Edrick Lee go close to scoring.
The big screen appears to show that Edrick Lee grounded the ball, which brings howls of outrage from the travelling Jets supporters.

72nd min: Pat Mata’utia scores against the run of play for the Knights. Gudgeon converts.
The Knights lead 28-18 and with six minutes left to play would appear to have secured the result.

Highlights from the ISP NSW 5th Round from the NSWRL website: http://www.nswrl.com.au/news/2017/04/03/highlights_intrust_s.html