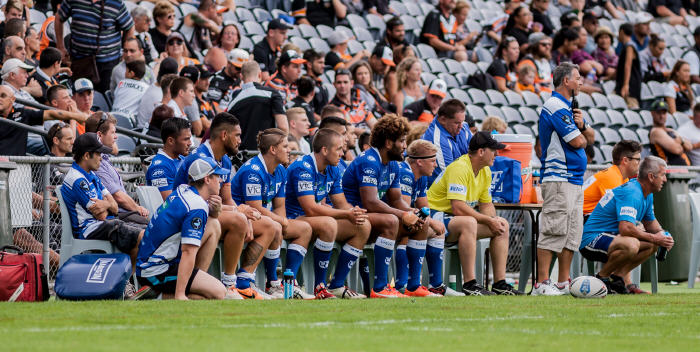 The Newtown Jets lost their NSW Cup trial match against Wests Tigers 18-12 at Campbelltown Sports Stadium on Saturday evening. This was a spirited encounter, and was the first occasion that the Jets own pool of trialists had combined with the Cronulla Sharks full-time squad members.

Jets head coach Greg Matterson was pleased with the overall dividends from the trial, and saw it as a good opportunity for new combinations and understanding to be developed. Wests Tigers scored four tries to three, with two of their tries coming from runaway efforts after the Jets had been on the attack at the Tigers end of the field. Newtown’s tries were scored by winger Corin Smith, centre Jordan Drew and halfback Arana Taumata, with all three tries involving crisp handling skills and perceptiveness.

The match was played in humid conditions with several heavy showers falling during the game. The rain undoubtedly had some effect on the players’ handling but coach Matterson was not impressed with the amount of possession turned over by the Newtown boys. There were also some overly-adventurous passes that put paid to several Jets attacking raids.

Overall it was a good standard and well-contested trial with both sides displaying strong on-line defence. All the Newtown trialists received plenty of game time to press their selection claims, and there were a number of positive indicators shown with the opening NSW Cup competition round less than two weeks away.

There were some impressive performances on Saturday evening, especially from some of the Cronulla Sharks extended NRL squad members. Centre Jordan Drew, formerly with the Brisbane Broncos and a Junior Kangaroos representative, powered his way over for a second-half try in which he shrugged off three very determined Wests Tigers defenders. Hooker Fa’amanu Brown was returning from a long lay-off through injury and displayed silky ball-handling skills. Second-rower Kurt Capewell, a member of last year’s all-conquering Ipswich Jets National Championship winning team, looks to be the tough customer from central casting. Experienced prop Jesse Sene-Lefao, formerly with Penrith and Manly-Warringah and a Samoan international, worked hard up the middle and the young giant Harrison Muller, previously with the Roosters and Sharks Holden Cup squads, looks to be a player of great promise.

Head coach Matterson expects that Newtown’s team for the opening round of the 2016 NSW Cup competition will come together well at training over the next two weeks. The Jets take on Canterbury-Bankstown at Henson Park on Saturday, 5th March, at 3.00pm.

BREAKING NEWS: Paul Gallen has been confirmed as a special guest for the 2016 Newtown Jets season launch.

Entertainment: Steve Philp from the Footy Show and a regular at the acclaimed Sydney Comedy Festival.

Live and silent auctions on the night!

This will be a terrific opportunity for Newtown supporters of all ages to meet up with the Jets of 2016, and to have stacks of fun into the bargain.

The afternoon will include Pass the Ball & Impossible Basketball shot competitions; a spit roast (free for 2016 Jets members); Ice Cream Joe’s Mr Whippy; plus face painting for the little ones as well as old Newtown game footage on the big screen and DJ’s kicking out some great tunes. The ever-popular Jetman and Syd the Pig will also both be there. Unfortunately the jumping castle is a late withdrawal.

There will be a Jets merchandise stand where you can pick up the coolest rugby league attire in the nation as well as sign up for a season membership.

We’ll also have some great raffles & prizes to giveaway throughout the afternoon and you can also enjoy the great menu on offer at The VIC on the Park which will be open all day for meals, or to get a drink at the bar.

Last Saturday’s NSW Cup trial match at Campbelltown Stadium provided plenty of positives for both clubs. The game was played in humid conditions that were interspersed with several heavy showers. Wests Tigers led 10-4 at halftime and were ahead 18-12 at fulltime (having scored four tries to three).

Here’s some information on the Cronulla Sharks contracted players who turned out with the Jets for the first time on Saturday:

Anthony Moraitis: 20; 102 kgs. Junior club: Gymea Gorillas. Second-row/centre; Cronulla Sharks NYC 2015. Anthony is the grandson of Nick Moraitis, the highly-successful businessman and the owner of the famous Might and Power.