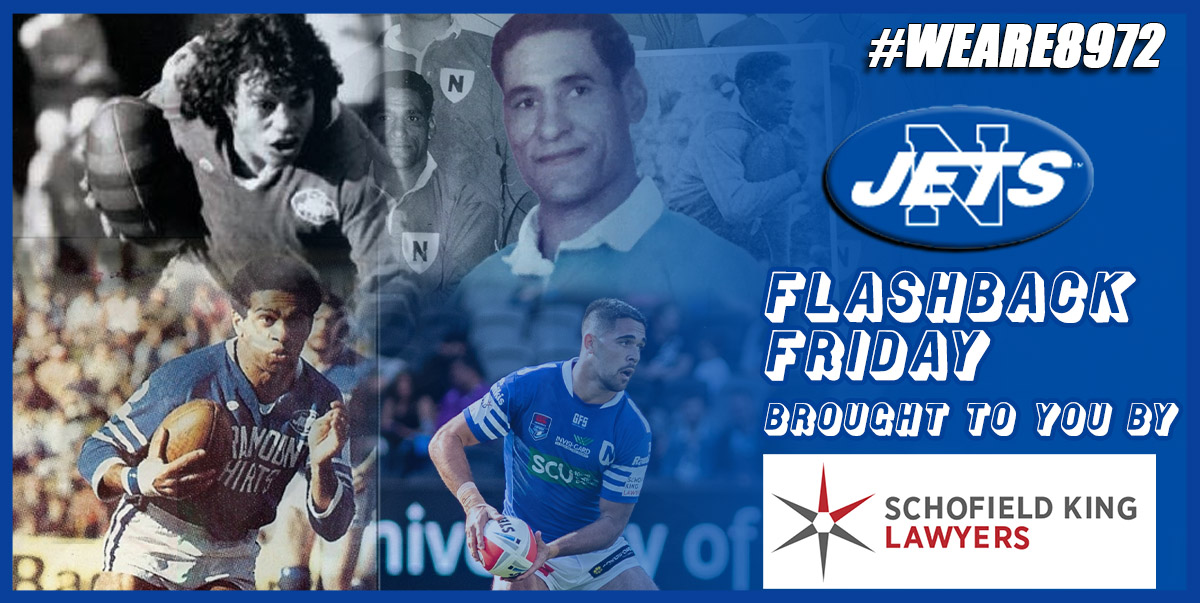 Last week, the NRL held its annual Indigenous Round and while we are a little late to the party this year, we thought we’d dedicate this week’s Flashback Friday to some of the deadly indigenous stars who have thrilled fans at Henson Park.

Hailing from Casino in northern New South Wales, Olive initially made a name for himself playing for Wests Wollongong and had represented his state on nine occasions by the time he arrived at Newtown in 1964. A powerful prop, he juggled his footy career with work as a coal miner and would regularly commute between Sydney and his home near Wollongong. An indigenous pioneer in the Sydney premiership, Olive cites the accepting nature of the Newtown club as a key reason why he represented the royal blue. “I was accepted at Newtown – that’s why I went back there for four years,” he told the Sydney Morning Herald in 2010. You can find out more about Olive in this recent article written by NRL.com’s Brad Walter.

A stylish winger/centre from Moree, Wright was graded by the Jets in 1974 and scored the winning try in Newtown’s 1974 reserve grade grand final win over Easts. Breaking into the top side in 1975, Wright had such a big impact that he was picked to play for NSW after just eight first-grade games. A noted flyer, Wright went on to play 78 first-grade games for the Jets, scoring 34 tries and in 1977 won the rugby league footballers’ sprint race at the SCG. Mark sadly passed away in 2017 aged 62. You can find out more about Wright in this 2011 feature story from the Barefoot Rugby League Show.

While born in Sydney, Ferguson arrived at Henson Park after being spotted playing for Glen Innes. He was an overnight sensation at the Jets, forming a brilliant combination with fellow indigenous winger Ray Blacklock during the club’s remarkable grand final charge. Ferguson was a mainstay at the club during its final three years in the top grade, crossing for 40 tries across his 74 games. When the Jets folded, he moved to Easts where he earned state and national rep honours, although probably the most fruitful period of his career came during his time with the Raiders with whom he won two grand finals (1989 and 1990) to add alongside his 1985 Challenge Cup triumph with Wigan. After retiring from top tier footy in 1990, ‘Chicka’ had a second stint with the Jets in 1991 during our debut season in the Metro Cup.

A product of the St Mary’s junior rugby league club in the Penrith district, Blacklock has the rare distinction of captaining Penrith to their first-ever grand final win, the 1978 under 23s decider. After making 26 first grade appearances with the Panthers, the indigenous winger shifted to Newtown in 1981 as part of Warren Ryan’s rebuilding program. His impact was almost immediate, scoring 11 tries in 23 games, including three during the final series. Blacklock moved to Canberra in 1983 playing two seasons with the Raiders before retiring from Sydney football.

The son of former Balmain player William ‘Bubba’ Kennedy, Will joined the Cronulla Sharks from his junior club St Patrick’s, Bathurst. Debuting for the Jets in 2018, Kennedy quickly became a fan favourite at Henson Park with his excellent displays at fullback. After guiding us to two successive Canterbury Cup Grand Finals, including our victory last year against Wentworthville, Will has recently stepped up to become a regular first-grader at the Sharks.