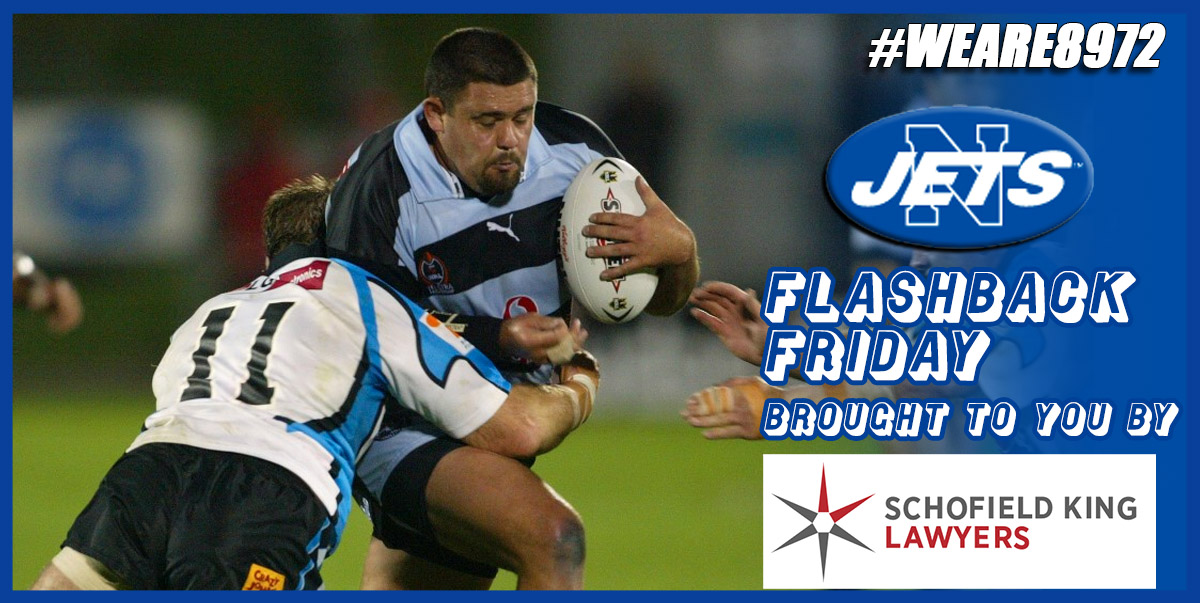 It’s the year 2000, and Tookey has just made the move across the Tasman after leaving Parramatta to join the Warriors.

“I had a two year contract with the Eels, but the club had the option of the third season,” Tookey says.

“During my second season (1999), Brian Smith pulled me aside and said the game was going to pass me by as the NRL was planning to reduce the number of interchanges.

“I asked whether I was free to look around, and he said ‘yes.’

“Hugh McGahan was in a recruitment role for the Warriors and when he was in Sydney I had a chat with him and joined up.”

Life at the Warriors didn’t get off to a flying start for Tookey. At the time, the club was flush with high quality props like Joe Vangana, Terry Hermansson and Jerry Seuseu, meaning that for a short period of time Tookey played with the Kiwis’ feeder-side, Newtown.

From Tookey’s perspective, it’s quite appropriate that our club’s nickname is the Jets, as during his time wearing the royal blue, the Logan Brothers product spent a lot of time in the air.

“There was a lot of travel involved,” he says.

“Every single week I’d train Monday, Tuesday, Wednesday and Thursday mornings in Auckland. Then on Thursday afternoon, I’d have a quick shower and jump on a plane to Sydney for a Thursday night training session with Newtown at Redfern Oval.

“Fridays we’d sit around in Sydney before having another training session in the evening before playing on the Saturday.

“If the Warriors were playing that weekend in Sydney, we’d usually watch their game at the ground and then catch the flight back with them.

“This went on for about eight to 10 weeks before I returned to first grade.”

Like any professional footballer, Tookey freely admits that he would have preferred to be playing first-grade with the Warriors at the time, but according to those who watched him play for the Jets, there was no doubt he was a valid contributor to the team.

“He was a great favourite with the fans,” recalls Newtown director Glen Dwyer.

“Immediately on arrival, it was clear that he was wholehearted in his approach to playing with the club.

“Despite his big frame, he could really sprint and it took us all a bit by surprise.

“I remember him making a really memorable burst against Norths at the old Northpower Stadium [now Central Coast Stadium] which brought the crowd to its feet.

“I also remember a great try he scored against Newcastle at Henson Park. The crowd started chanting ‘Tookey, Tookey, Tookey’ and put his hands in the air.

“He definitely won a lot of hearts with the Newtown faithful.”

After retiring from football in 2006, Tookey moved back to his home state of Queensland where he now balances his time between charity work and caddying for one of the world’s best blind golfers, Glenn Niciejews

“We were due to go to South Africa this year . . . but Coronavirus put an end to that,” Tookey says.