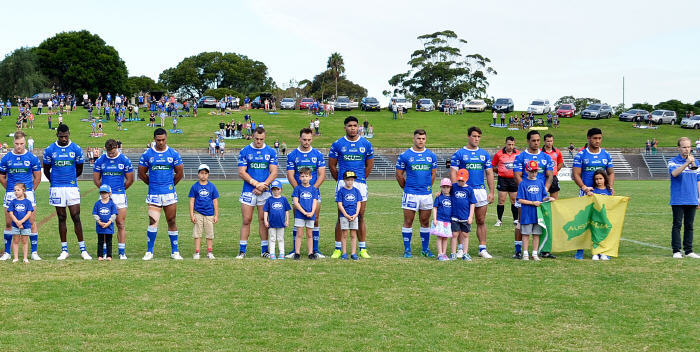 A heart-warming all-Australian image as the Newtown Jets of 2017 line up with children from St Michael’s School, Stanmore prior to a pre-Anzac Day ceremony at Henson Park on Saturday, 22nd April 2017. Photo: Michael Magee Photography

Jets get close to toppling Wyong but their own errors prove to be their undoing.

This was Newtown’s first home game for 2017 and the occasion had a slightly madcap touch to it. Former Sharks prop Jason Stevens was a member of a film production crew that used the game for crowd footage to accompany the feature film they were shooting. First time visitors to the ground would have been bemused by the film crew and extras activity while the Jets-Wyong game was in progress.

Wyong kicked off to the southern end of the ground.

4th min: Scrum-feed to Newtown 10m out from Wyong’s line

Tepatasi Fuiavailili gets across the line but is held up

8th min: Jets lose the ball on their own line

11th min: Jets turn the ball over on the half-way line

18th min: Jayden McDonogh and Matt Evans combine to send Leigh Higgins clear to score next to the posts

Another swirling high kick from Wyong puts Jets under pressure

Penalty to Wyong 30m out from Newtown’s line

Wyong knocks on, quickly followed by Newtown. Some very ragged handling by both teams at this juncture.

The heat is most certainly a contributing factor to fatigue

Still very humid for this late in April

Converts his own try

Nikorima is causing the Newtown defence all sorts of problems

His grubber kick close to the Newtown line is knocked on

McDonogh defuses the situation by snapping up a Wyong short kick

Coach Matterson didn’t hold back in his half-time remarks:

Too many passes being made under pressure

Need to get more structure back into defence, exactly as practised at training

Jets had let Wyong back into this game in the last 15 minutes.

Jets kicking off to the southern end.

44th min: Wyong scores in the north-east corner but there was some doubt about whether there had been some off-side play by Wyong in the lead-up to this try

Touch judge did not intervene; a lesson in playing to the whistle

Repeat penalties to Newtown in midfield in 47th min

Veteran front-rower Khalid Deeb is back on Henson Park in Newtown colours after having retired as a player four years earlier (50th min)!

Jets continue to have problems with getting the best results from their end of set options.

Too many times the Jets get to Wyong’s end but at the end of that set of possession they come away with nothing.

Daniel was back in action for Newtown on Saturday after being injured in the second round.

Newtown’s continued error rate was of great assistance to Wyong

Wyong lose the ball bringing it out from their own line.

This was the chance Newtown needed.

Jets lose the ball 20 m out from their own line

Wyong go on the attack to sew up the game

Wyong pass is intercepted but Jets player then loses the ball while in full flight towards the line in 72nd minute.

Daniel Mortimer injured and goes off for concussion test

Jets apply plenty of pressure but Wyong’s defence hang on

Scuffle breaks out 20 m out from the Wyong line