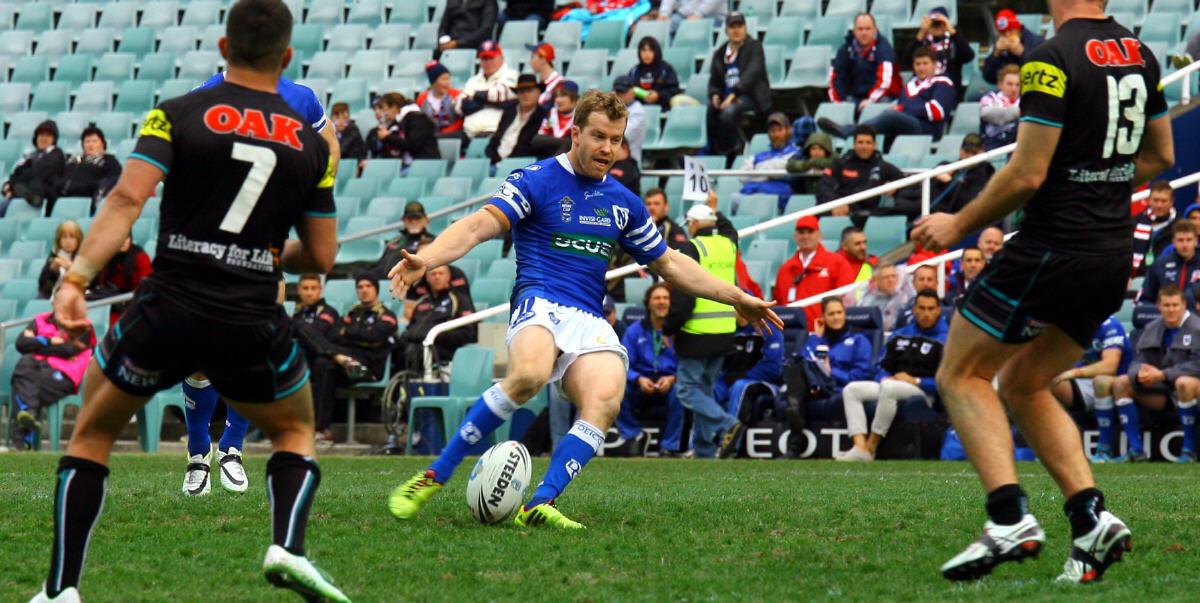 You’re in for plenty of excitement when you tune in to JETS TV www.newtownjets.com at 3.00pm on Saturday, 9th May. Be sure to also follow our commentary team on www.twitter.com/newtownrlfc as they revisit what was a thrilling VB NSW Cup encounter between the Newtown Jets and the Penrith Panthers played at Allianz Stadium on Saturday, 19th July 2014. Due to the unusual structure of the 2014 VB NSW Cup draw the two teams had met the previous weekend at Penrith Stadium, with the competition leaders and eventual premiers Penrith prevailing by 36-20. The Panthers were on an eleven-game winning streak that showed no signs of ending, while Newtown desperately needed to win this 19th round match to remain in touch with the top 8. Another feature of this game was that it was being played in the disruptive period following the announcement by the Sydney Roosters that they would be terminating the nine-year partnership that had operated between the Jets and Roosters.

How you can help keep the Jets flying:
Purchase a Keep the Jets Flying Membership now or upgrade your existing 2020 membership to show your support and help the Newtown Jets through this critical time in the club’s history. You will receive access to stream the “We Are The Champions (Newtown Jets 2010 – The Rugby League Story of the Year)” documentary. Not only that, but we will send you a digital “Keep the Jets Flying” print personalised with your name and membership number, as well as a pdf link to our Newtown Jets 2019 Premiers and State Champions colour poster.

We are very grateful to everyone that has already supported our Keep The Jets Flying fundraiser and we urge you to encourage your friends and neighbours to also get on board. Don’t forget that we also extend an invitation to your much-loved family pets to also take out memberships and help the Jets get through these perilous times!

We understand that not everyone can afford to help financially during these extremely challenging times but if you can, WE NEED YOU! For details of the fantastic package on offer: JOIN HERE.

Our members are the cornerstone of this great club. By becoming members they have shown they are more than just supporters and are an invaluable part of the Newtown family.

To thank our members for sticking with us through these unparalleled times we’ve introduced our Members Badge Draw which will be drawn every Thursday.

This week’s prize is a $50 voucher from MANOOSH PIZZERIA, a Newtown Jets cap plus two Jets stubby holders.

And the winner is: Liam Gooley, Membership Number 844.

Here’s a great article from the League Whistle website that is a great source of rugby league stories.

And Mal Graham (who played with Newtown in 1982 and 1983 and has contributed strongly to the Newcastle District Rugby League and the NSW Country Rugby League over the past thirty years) was interviewed by Andrew Moore on ABC Grandstand last Saturday. This is a top-class interviewing performance well worth listening to:
https://www.abc.net.au/radio/programs/best-of-grandstand-podcast/malgrahamnewtown/12208840

For those of you who missed Jets CEO Stuart McCarthy’s first-rate interview on the Progressive Rugby League podcast:
https://twitter.com/ProgRugbyLeague/status/1255388593612300289

As always, there are some great buys to be had when you check out the Newtown Jets clothing and merchandise website on:  www.newtownjetsclothing.com.au

You can also purchase Jets merchandise by calling 9052 6980 during ordinary business hours.

The favourably-reviewed and updated Newtown RLFC history, Taking It To The Streets – The Second Life of the Newtown RLFC, can be purchased online by going to:

You can also buy this book by calling 9052 6980 during ordinary business hours.