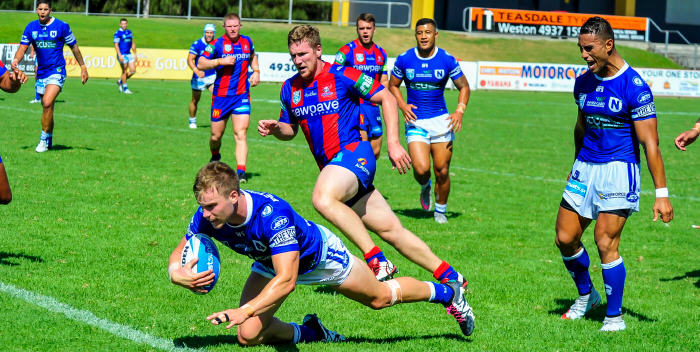 Jordan Drew was signed by the Sharks from the Brisbane Broncos and he has been in top form for the Jets. He is seen here scoring for Newtown against the Newcastle Knights at Cessnock last Saturday. Photo: Gary Sutherland Photography.

Greg Matterson celebrates his 200th game at the helm of the oldest Australian Rugby League club, as the Jets finally exorcise the Curse of the Hunter

All the details from the Intrust Super Premiership NSW match between the Newcastle Knights and the Newtown Jets, played at the Cessnock Sports Ground on Saturday, 12th March 2016.

Coach: Greg Matterson (who was celebrating his role as Newtown’s Head Coach for the 200th game of NSW Cup and ISP NSW competition matches from 2008 to the present day).

The Newcastle Knights team was:

Knights kicked off, with Newtown defending the southern end of the Cessnock Sports Ground.

7th minute: Jets knock on midfield, Luke Yates scores for the Knights next to the posts. Converted by Bryce Donovan, Knights lead 6-0.

10th minute: Knights knock on 10 metres out from their own line.

14th minute: Jordan Drew seeking treatment for an injury, remains on the field.

15th minute: Knights knock on 40 metres from their own line. It was on the 2nd tackle after receiving a penalty.

19th minute: Knights win a scrum against the feed and then concede a penalty.

Newtown Jets kick off for the second half, defending the northern end. Breeze is now coming from the north-east.

47th minute: Josh Cleeland scores under the posts and converts his own try. Newtown 20-6.

59th minute: Travis Robinson and Fa’amanu Brown display great handling skills and Jordan Drew posts his hat-trick. Arana Taumata is down in the back-play. Travis Robinson misses the conversion from wide out and Newtown leads 28-6.

60th minute: Play resumes after a drinks break and Arana Taumata is still on the field.

71st minute: Trey to Will Pearsall and converted by Bryce Donovan. Newtown leads 28-16.

74th minute: Knights back on the attack after the Jets fail to clean up a bomb.

76th minute: Jets forced into another goal-line drop-out situation. The Knights knock on 5 metres out from Newtown’s line, after the Jets had been forced to defend for three consecutive sets.

The Newtown RLFC announced that the experienced utility back Travis Robinson had been signed and was named on the bench for this match. Robinson’s biographical details are on this link: https://en.wikipedia.org/wiki/Travis_Robinson

Coach Greg Matterson was impressed overall with the Jets’ playing performance in what were very trying playing conditions, but he was concerned with the errors made in the last quarter. Newtown had last beaten a Newcastle Knights team in an away fixture in 2008. Now for the Warriors in Auckland next Sunday!

Other Round Two  ISP NSW results: