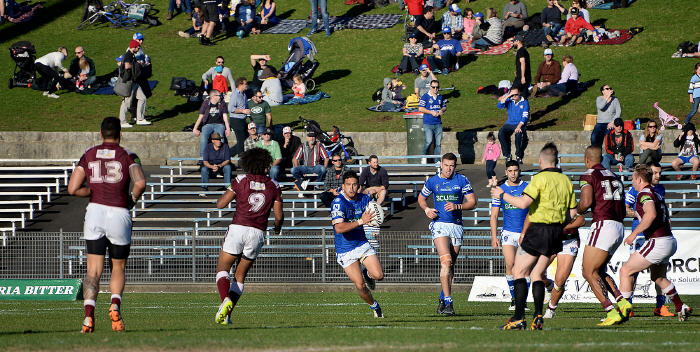 The Newtown Jets 2016 NSW Cup pre-season squad is now into the third week of their training program. The Jets coaching staff have been impressed with the number of youngsters who have reported to training fit and ready for more intensive work. Others have also taken on extra weights training since Newtown’s last competition game against North Sydney in late August.

New Zealand-born winger Corin Smith joined the Jets mid-season in 2015 from the Mudgee Dragons in central-western NSW, and he is showing the benefits of a well-planned weights training program. Smith proved to be a prolific try-scorer for the Jets, including a personal haul of four tries against the North Sydney Bears in the final NSW Cup competition round. Jets trainer Jason Sharpe says that Smith is sure to benefit in 2016 through his increased ability to break through tackles, and also to defend more effectively against opposition wingers who can weigh in excess of 110 kilograms.

Another Kiwi import to the Jets last season was big forward Malakai Houma, who had been spotted by the Jets recruiting staff while he playing for the Mt Albert (Auckland) club in the Fox Memorial Shield competition, which was being shown here on the NITV Channel. Houma has also undertaken a personal weights training program designed for him by the Jets staff, and he is well on the way to putting in a very productive pre-season.

While most of the Newtown team in any 2016 competition game will most likely be drawn from the Jets’ own pool of contracted players, the Inner West Siders’ partnership with the Cronulla Sharks will ensure that they will have the services of a number of Sharks NRL squad members in all NSW Cup games. The Sharks are actively recruiting to their NRL full-time roster and the calibre of the players being added to Cronulla’s squad augurs well for the overall strength and depth of Newtown’s 2016 NSW Cup contingent.

Newtown’s coach Greg Matterson has advised that the Jets pre-season squad is training three afternoons a week at the club’s Marrickville gymnasium and at Mahoney Reserve in South Marrickville. The boys also put in a weekend-morning intensive session at a venue selected from coastal locations such as Clovelly, Coogee, Maroubra and La Perouse. (Source: Glen ‘Bumper’ Dwyer’s JETS Newsletter)