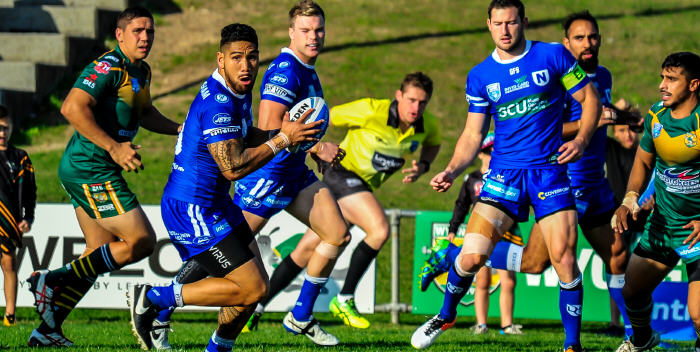 High-performance Newtown Jets front-rower Jesse Sene-Lefao looks to get his pass away against Wyong, with his team-mates Jordan Drew, Mitch Brown and Travis Robinson in the background. Photo: Gary Sutherland Photography.

Huge month at Henson Park coming up for the Jets

June is going to be a big month for Rugby League at Henson Park, with the Newtown Jets playing at home on three consecutive Saturdays.

This Saturday, 4th June, the third-placed Jets play the Illawarra Cutters (currently in fourth place) at Henson Park at 3.00pm. This will be the Intrust Super Premiership match of the round, with the St George-Illawarra NRL partnership club having prevailed against the Jets by 28-14 in Wollongong seven weeks ago. Newtown had a bye last weekend while the Cutters seized a last-minute victory at WIN Stadium against Wyong.

The Jets will be home again versus Wentworthville on the 11th June, and then back at Henson Park on the 18th June when they will host one of the competition’s form teams, the Stacey Jones-coached New Zealand Warriors. There will be first-rate family entertainment laid on at all three of these home game occasions, including a Latin American Rugby League celebration day on the 11th June.

Jets head coach Greg Matterson is unequivocal about how important all of these home games will be. He noted that this year’s ISP competition is fiercely-contested, and that one loss can send a team plummeting down several places on the competition table. Newtown has the chance with this hat-trick of home games and the backing of their army of loyal fans to lock in a place among the competition’s pace-setters.

All of Newtown’s run of home games in June kick off at 3.00pm, and there will be curtain-raisers from 11.00am onwards on each day.