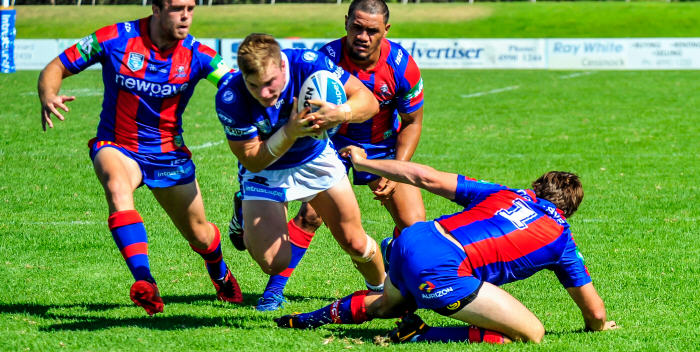 The former Brisbane Broncos centre Jordan Drew (with the ball) could well be a trump card for the Newtown Jets when they take on the New Zealand Warriors at Mt Smart Stadium on Sunday, 20th March. Photo: Gary Sutherland Photography.

If the Jets are to be a top-flight team in 2016, Sunday’s away game against the Warriors is a must-win assignment …

The Jets take on the in-form New Zealand Warriors in Auckland this Sunday.

Please note: Contrary to information previously provided to the Newtown RLFC administration, this match kicks off at 9.45am (AEDT) on Sunday, 20th March and will not be televised live on Fox Sports One as had been advised.

This is the tenth journey by the Jets across the Tasman. Of the nine games previously played in Auckland between 2007 and 2015, Newtown has won on four occasions and lost on five.

The weather forecast for Auckland on Sunday is: 25 degrees Celsius; scattered showers.

Sharks and Newtown hooker/utility forward Matt McIlwrick received an accidental poke in the eye in the Newtown Jets Intrust Super Premiership match against the Newcastle Knights. With some bleeding behind the eye and due to the sensitive nature of the injury, McIlwrick was kept out of the Jets team to travel to Auckland to take on the Warriors this weekend. And McIlwrick’s Sharks and Newtown teammate Kurt Capewell also succumbed to injury in the Jets win over the Knights, limping from the field with a knee problem in the 37th minute of the match. While fears were held as to the extent of the injury, Capewell received good news following scans conducted at Southern Radiology where it was revealed the former Ipswich Jet to have suffered only minor damage. Like McIlwrick, Capewell will miss the New Zealand trip but is expected to be available the following weekend.

Other ISP NSW Third Round matches to be played this weekend:

Highlights from all the games played in Round Two of ISP NSW (including Newtown’s 28-20 win against the Newcastle Knights): http://bit.ly/1S3N3Q5

How the Jets win against the Newcastle Knights was reported on pages 15 and 16 in the Cooks River Valley Times of Wednesday, 16th March: http://bit.ly/1ptGnBY

The Newtown Jets have been rated as the Greatest Hipster Club in the world of Rugby League, edging out some rather out there Rugby League clubs in cities like New York, Toronto and London. Make sure you have some of your own cutting-edge Jets clothing and merchandise – go to: www.newtownjetsclothing.com.au to make your selection (naturally you can make your purchases online).