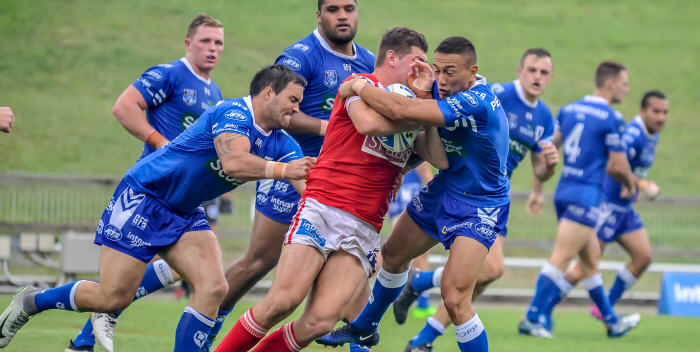 Newtown scored the first try at WIN Stadium on Saturday, but Illawarra scored four tries over a twenty-minute time span that gave them a tight grip on the eventual result.

Playing surface: In first class condition, in spite of virtually six days incessant rain and two curtain-raisers being played on Saturday before the ISP NSW match.

The match was broadcast by Steele Sports.

NB: The Illawarra RLFC is no longer sponsored by Illawarra Coal so the use of the nickname Cutters has been discontinued.

Illawarra kicked off running to the northern end.

3rd min: Matt Evans try, on the back of two consecutive penalties.

Not converted by Fa’amanu (Nu) Brown – his kick struck the left upright.

Try was scored about 15 metres in from the south-west corner.

There was a lot of dropped ball by Illawarra in the first twenty minutes.

Illawarra had a big forward pack, with giants like Mose Masoe and Luciano Leilua.

The next set ended in another penalty to Newtown, this time in front of the southern posts.

Jets unable to turn this territorial advantage into more points on the board.

37th min: Jets turn the ball over and Illawarra five-eighth Jai Field sprints 85 metres to score. Converted by Nona. 6-all.

Newtown have had a lot of opportunities and time in possession in Illawarra’s twenty-metre zone for only one try.

The start to the second half that Newtown certainly did not want.

42nd min: Josh Kerr barges over to the left of the southern goal-posts. Nona converts. Illawarra 12-6.

Illawarra looking re-energised early in the second half, more purposeful and the forwards are running with great vigour.

47th min: Opportunity for Newtown as Illawarra lose the ball 20 metres out from their own line, but Newtown lose the ball almost immediately.

An average set of six by the Jets as they try to get out of their own end. The second half isn’t going well for them.

Nona does not convert from wide out. Illawarra 22-6.

61st min: Newtown is trapped again in their own in-goal.

Nona is controlling play with confidence.

63rd min: Elusive run by Manumalealii. He gets to within 10 metres of the Illawarra try-line, and then Newtown gets a penalty.

A repeat penalty to the Jets but they put the ball down.

68th min: Another penalty to Newtown for a ruck infringement.

69th min: Jordan Drew goes hard for the north-west corner, but he tackled  out in the corner by determined Illawarra defence.

72nd min: More good defence by Illawarra in their own 20 metre zone. Newtown’s grubber kick into the in-goal is defused.

75th min: A great midfield burst by Newtown’s Samoan international prop Sam Tagataese, but as he is tackled his out the back pass is intercepted by Illawarra.

76th min: The game is gone for Newtown.

Two consecutive penalties to Illawarra; Illawarra players held up over the tryline twice in two minutes.

78th min: Manumalealii kicks in behind the Illawarra defensive line.

Illawarra fail to clean up the bouncing ball and it is seized by winger Leigh Higgins, who runs in to score to the left of the northern-end posts.

How Ryan Selvage from the NSWRL reported on this game: http://www.nswrl.com.au/news/2017/03/18/illawarra_out_gun_je.html

Newtown is in 8th position on the competition table after three rounds.

And Gary Sutherland was also on the job down in Wollongong:  http://www.pbase.com/gsphotography/newtown_vs_steelers_180317&page=all