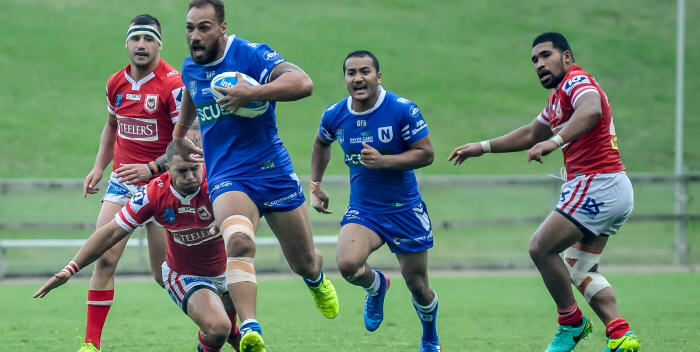 Illawarra’s second half power surge shuts down the Jets

The Newtown Jets have slipped down the Intrust Super Premiership NSW competition table following their 22-12 loss to Illawarra at WIN Stadium, Wollongong on Saturday. The teams went into the halftime break at 6-all, but the Illawarra team added three tries in the second half and were in control for most of the second forty minutes of play.

The Jets scored their first try in the third minute, but missed scoring opportunities in the rest of the first half that may well have changed the outcome of this match. Illawarra scored a runaway try late in the first half, and then added three more tries in the third quarter of the game. Newtown scored a converted try two minutes out from fulltime, meaning that the two Jets tries had been scored nearly seventy-five minutes apart.

Jets coach Greg Matterson noted after fulltime that while Newtown’s first half defence had been an improvement on the previous weekend, Newtown’s attack in the first half on Saturday had lacked the execution and polish to turn opportunities into tries. Matterson said that Newtown should have gone in at halftime with a strong lead and they paid the price for these missed chances.

Illawarra began the second half with considerable energy, scoring three tries in a fifteen minute spell. Newtown then managed to force Illawarra into several repeat goal-line drop-outs, but these were all in the last twenty minutes. The Jets were guilty of some defensive and disciplinary lapses in the second half that the big Illawarra forward pack fully exploited.

Jets front-rower Kurt Dillon turned on a strong defensive display in the wet conditions and was Newtown’s best forward. Tony “The T-Rex” Williams stood out in the first half but unfortunately was sidelined after halftime through a shoulder injury. Samoan international prop Sam Tagataese put in an improved performance and Jack Williams worked hard in defence.

The Newtown Jets travel to Campbelltown Stadium next Saturday, 25th March, to take on the winless Wests Tigers. Both teams will be desperate to gain competition points in this fourth round ISP NSW fixture, with the match timed to start at 3.00pm.