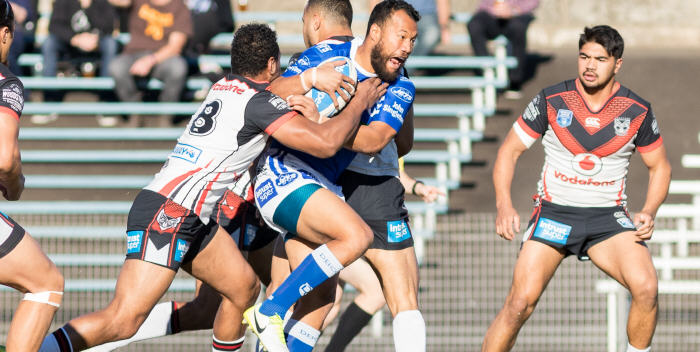 In-form Jets make the most of the Festival occasion

Newtown’s first win at home at Henson Park for this season was a special occasion for the club. The Jets scored an upset victory on Saturday over the second-placed New Zealand Warriors by 38-12, after having run up a big 28-0 lead going into half-time.

Saturday was also the Beer, Footy and Food Festival, and an exuberant crowd of over 6000 surged into Henson Park for the rugby league match and this much-anticipated community celebration. Last Saturday was also notable for one of Newtown’s longest-serving and most popular players, Kurt Kara, who played his 150th game for Australia’s oldest rugby league club. A large group of his family members, friends, Jets team-mates and Warriors opponents paid Kurt the special honour of performing a tribute Haka for him at the game’s end. This spectacle was one of the most spellbinding events in Henson Park’s recent history.

The Jets thrilled the big attendance by turning on their best performance of the season. The players were no doubt motivated by the crowd, the special occasion for their respected team-mate, and the fact that winning kept alive their hopes of a place in the finals. Newtown completed very well in the first half and took advantage of every opportunity by putting 28 points on the score-board by half-time.

The Warriors fought back hard early in the second half but Newtown’s tight defensive line denied them any points. The Jets actually increased their lead to 38-0 before the Warriors scored two converted tries in the latter part of the second half.

Coach Greg Matterson was understandably pleased with the Jets’ performance and he named Adam Clydsdale, Leigh Higgins, Jimmy Jolliffe, Joseph Paulo, Jack Williams, Jason Schirnack, Sam Tagataese and Reubenn Rennie as being Newtown’s best on the day. Warriors coach Ricky Henry joked after the game that his players had run into an ambush, and said Newtown had played extremely well and would have beaten any team in the competition on that form.

Newtown has another bye in the Intrust Super Premiership next weekend, and then play away to Canterbury-Bankstown on Saturday, 5th August at Belmore Sports Ground at 3.00pm.