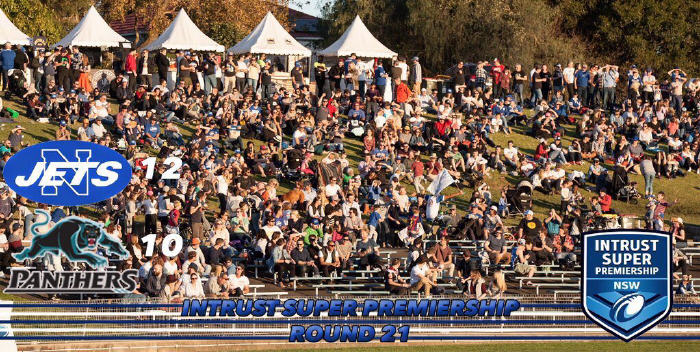 It certainly was a day to remember at Henson Park – the inaugural Beer, Footy and Food Festival was a great success, and a huge crowd saw a courageous win by the Jets over the Penrith Panthers

A crowd estimated at around 3500 saw Newtown lead the Panthers 6-0 at halftime, trail 10-6 with fifteen minutes left to play, and then retake the lead by 12-10 just five minutes from fulltime. This was a very physical game as the two big forward packs sought to gain domination. The Jets suffered several injuries and were down to two men on the bench in the latter stages of the game. This was a most valuable win both in terms of the points table and team morale. It was all the more remarkable when you consider that Penrith had beaten Newtown 60-6 only five weeks ago. This might have been a low-scoring game but the big crowd and the full-blooded application of both teams gave the game all of the breathless, savage intensity of an elimination semi-final. Newtown was coming off four losses in their past five games and badly needed to win to stay in touch with the top four. Penrith went into this match one point behind the Jets on the ISP NSW competition table, and would have moved one point ahead of Newtown had they prevailed this afternoon.

The Newtown RLFC extends sincere condolences to the family of Doug Passlow who passed away last week. Doug played several seasons with Newtown in the early 1950’s and remained a loyal Bluebag to his dying day. He had attended several Reunion Days in recent years, where he expressed great pleasure that the Newtown club was being well-administered and that it remained competitive at a high-standard level of Rugby League.

Penrith kicked off with Newtown defending the northern end of the ground.

Great weather and the big crowd created a vibrant atmosphere.

Newtown was forced into a goal-line drop-out in the 4th minute.

Panthers gain a repeat set and start to apply the blowtorch to the Newtown defence.

Yet another repeat set to Penrith and Newtown’s Jordan Drew is down in the back play.

Good line speed shown by the Jets defence as they meet the Panthers’ challenge.

Jets gain a repeat set in the 10th minute.

Newtown’s 5th tackle options not causing much concern to Penrith.

Jets five-eighth Josh Cleeland is felled in the back play.

Te Maire Martin looks dangerous for Penrith whenever he gets involved.

Another repeat set to Penrith and Dockar-Clay gets across the line but can’t ground the ball.

The match is developing into a real battle of the big forwards.

The physical confrontations are bone-crunching – who will buckle under first?

The two forward packs are like two heavy-weight boxers probing and looking to land a telling blow.

Anthony Moraitis gets across the line but is held up.

Weight of possession tells – Jets have several sets inside Penrith’s twenty and Nu Brown dummies his way over to score in the 29th minute, 19 metres in from the eastern touchline.

Both teams making errors in the last ten minutes of the first half as the pressure starts to mount.

The crowd is helping to create a finals atmosphere.

Jets on the attack in the last couple of minutes.

Second Half:
Penrith running to the Sydenham Road end.

This really is a no-holds barred contest, with the hard hits starting to take their toll.

Penrith create an overlap on their left side and Josh Hall scores in the south-eastern corner in the 45th minute.

Not converted and Newtown leads 6-4.

Try scoring opportunity for Newtown lost when Nu Brown fires out a good pass but the ball goes to ground.

Cleeland is subject to some blackguardly behaviour in the back play.

It is a dour struggle but there is a great deal at stake for both teams.

Panthers score in the 64th minute with a high kick that is tapped back to their centre Jennings. Hall converts from the sideline looking into the sun.

Penrith leads for the first time in the game, 10-6 in the 65th minute.

Jason Schirnack makes a great break for Newtown, but the ball is lost close to the Panthers try-line in the 71st minute.

Penalty to Jets puts them in an attacking position and Nu Brown dummies, feints and goes under two defenders to score in the 74th minute, 5 metres to the left of the northern goal-posts.

Jets hang on for the last five minutes.

After the match interviews: –
Greg Matterson:

We were down to 15 men and there were other blokes playing wounded.

The win was a huge boost for Newtown’s pathway for the rest of the season.

The crowd helped get the boys home.

Newtown hung in for a long period and never let Penrith take a winning lead.

The crowd created atmosphere and the boys responded.

It was tough going in the forwards but we knew we had to take control there because of the injuries in our backline.

Penrith made 12 errors to Newtown’s 9.

Newtown had 55% of possession

Newtown’s centres Matt Evans and Jordan Drew both went off with injuries.

Newtown had 187 plays with the ball compared to Penrith’s 151.

Newtown had more kicks but Penrith’s would have been deemed to be more effective.

Other 21st Round ISP NSW results: