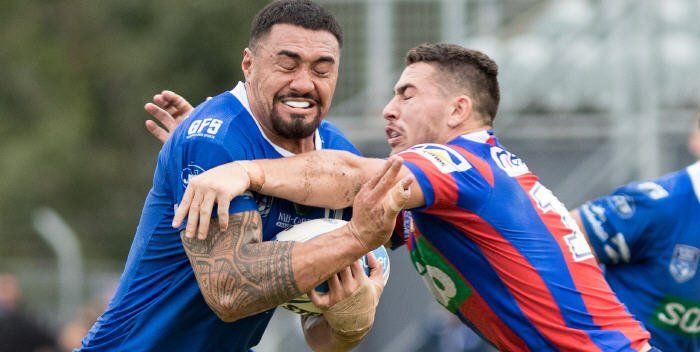 Jets fans will be hoping that Newtown Jets backrower and edge-runner Kenny Niko will be at his damaging best in Saturday’s match against the Sea Eagles at Henson Park. Photo: Mario Facchini (MAF Photography)

The Jets are back at home tomorrow when they take on Manly-Warringah’s partnership club.

The fighting spirit of Kevin Maish ….

Henson Park regular Kevin Maish has been following Newtown since the 1940’s.

He was born, raised and lives right in the heartland of traditional Bluebag and Jets territory in Probert Street, Newtown.

Kevin was spotted in Marrickville Metro during the week and was asked “how will the boys go this Saturday”?

He replied: “Newtown won’t be at full strength on Saturday and I hear that the other mob will have about 14 Manly NRL blokes playing for them”.

Kevin then added with emphasis: “That’s exactly the sort of challenge we like at Henson Park. It’s when the Newtown boys are at their best – I say bring on the Sea Eagles!”

His trusty comrade-in-arms Paul “The Race Caller” Clarke is also going to be at Henson Park on Saturday to rev the boys up.

The Blacktown Workers Sea Eagles will be making their first-ever appearance at historic Henson Park:

If you can’t make it to Henson Park, tune in to: www.steelesports.com.au from 2.30pm for all the action.

The Newtown Jets return to Henson Park this Saturday, 17th June after a successful trip to the Hunter for another all-important Intrust Super Premiership NSW clash with the in-form Blacktown Workers Sea Eagles kicking off at 3.00pm. The Jets will be raising funds on the day for the Mark Hughes Foundation’s BEANIE for BRAIN CANCER (for more information about how you can make a donation: https://give.everydayhero.com/au/newtown-jets-suports-beanie-for-brain-cancer) as well as celebrating Saulala Houma‘s milestone of 100 NSW Cup games for the Jets achieved last weekend against Newcastle. The match will be preceded by a Harvey Norman Women’s Premiership clash at 1pm.

It’s an SCU – More Generous Banking FAMILY DAY so there will be plenty of fun for the kids on the DEICORP Family Hill featuring jumping castles, face painting, pass the ball, Ice Cream Joe’s Mr Whippy & Barista along with JETMAN & SCU’s Syd the Pig.

Here’s your chance to join in the festivities, enjoy a few beers and smash a few steak &/or sausage sandwiches for FREE! Once again in 2017 City Ford Rockdale has the Best Seat at Henson Park and it could be yours this Saturday. That’s right FREE Beer, FREE food, FREE entry plus Royal Blue Bean Bags in the JETPAC Ford Ranger to watch the game from. Just LIKE the City Ford Rockdale Facebook Page and post the hashtag #bestseatathenson and you could be this week’s winner!