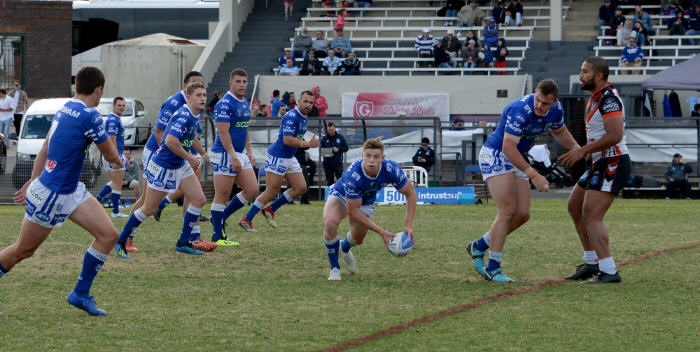 It’s a vital game for both the Newtown and Western Suburbs clubs at Henson Park this Saturday (25th August) – and please be aware it is a 1.00pm kick-off

In the 23rd round match played at Henson Park on Saturday, the Newtown Jets turned on one of their best attacking displays this year in running up a 52-16 victory against the New Zealand Warriors. Newtown led 26-10 at halftime and went on with the job in emphatic style in the second half.

Five-eighth Jack A. Williams made a triumphant return from injury by scoring three tries and providing a deft touch to several Newtown attacking forays. The Jets forward pack played very well and dominated their opponents. Jimmy Jolliffe and Wes Lolo were two of the best forwards, while centres Aaron Gray and Reubenn Rennie both ran with fearless determination. Newtown coach Greg Matterson said the Jets’ high completion rate in both halves was a key contributor to their commanding performance.

The Jets have a lot at stake when they play Western Suburbs on the club’s annual reunion day at Henson Park next Saturday, 25th August. Newtown has the chance to secure a top-four finish and to possibly claim second place on the competition table. Saturday’s match will also decide the winner of the 2018 Tom Raudonikis Cup. This final-round Intrust Super Premiership match is being televised live on Channel Nine and kicks off at 1.00pm.

This match is being televised live on Channel Nine – please note the early kick-off time!

Once again the Newtown Jets are turning on a first-class Father’s Day offer!

This year there is a special Father’s Day Gift Pack.

Please go to this link for details: https://www.newtownjetsclothing.com.au/

For $60 and postage the offer includes:

A Bluebags Forever t-shirt, a True Blue Jets Trucker’s Cap, as well as a free t-shirt valued at $25 with every Father’s Day Gift Pack purchase;

PLUS … every Father’s Day Gift Pack purchase will entitle the buyer to a 20% discount off any Contare Mens Sleepwear purchase ( https://www.newtownjetsclothing.com.au/product/fathers-day-gift-pack/ )