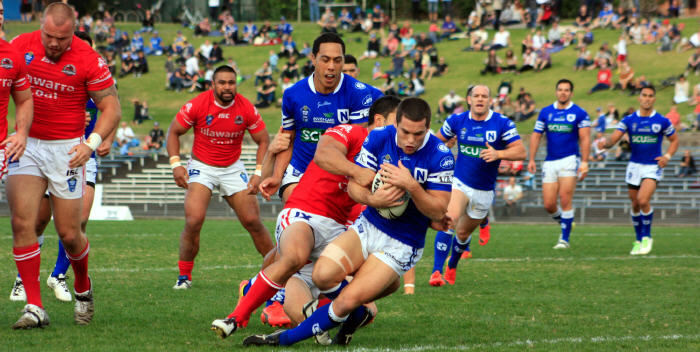 The last time Daniel Mortimer (pictured scoring) played for Newtown against Illawarra at Henson Park back in May 2014 he helped steer the Jets to a comprehensive 44-22 victory. Photo: MAF Photography

It’s Ladies Day at Henson Park on Saturday, 20th May when the Newtown RLFC will pay tribute to the tremendous role played by women in the Rugby League game

The Jets need to maintain their momentum from last Sunday’s win against North Sydney when they meet the 5th placed Illawarra at Henson Park this Saturday.

This match is being broadcast live on: www.steelesports.com.au

The Newtown Jets return to Henson Park on Saturday, 20th May for an all-important Intrust Super Premiership clash with Illawarra. The Tom Kirk Cup is up for grabs along with two vital competition points at 3.00pm on the Jets’ annual LADIES DAY promotion. This is the annual occasion when the Jets pay tribute to the enormous role played by women in so many aspects of the modern Rugby League game. The match will be preceded by a Harvey Norman Women’s Premiership clash at 1pm.

Here’s your chance to join in the festivities, sink a few beers and devour a few steak &/or sausage sandwiches for FREE! Once again in 2017 City Ford Rockdale has the Best Seat at Henson Park and it could be yours this Saturday. That’s right FREE Beer, FREE food, FREE entry plus Royal Blue Bean Bags in the JETPAC Ford Ranger to watch the game from. Just LIKE the City Ford Rockdale Facebook Page and post the hashtag #bestseatathenson and you could be this week’s winner!

There truly isn’t a better time than now to upgrade your Car Now! Plus You will be supporting the businesses who love the Newtown Jets!

If you think that a brand new Ford sounds awesome at City Ford Rockdale’s busiest time of the year, call the sales hotline on 1300 854 384 Now!

Hurry the sale is only for this weekend beginning on Friday and ending at 4:30 on Sunday.

And as we head into the winter months, check out the excellent range of Newtown Jets clothing and merchandise: www.newtownjetsclothing.com.au

Here are the highlights from the 10th Round of the ISP NSW, including all the tries from that thrilling North Sydney v Newtown match (and be sure to watch Edrick Lee’s 90 metre victory dash!): http://www.nswrl.com.au/news/2017/05/18/highlights_intrust_s.html

Here are all the 11th Round teams plus the updated ISP NSW competition table after 10 rounds: http://live.nswrl.com.au/comp/3ec60a38ee446fb80