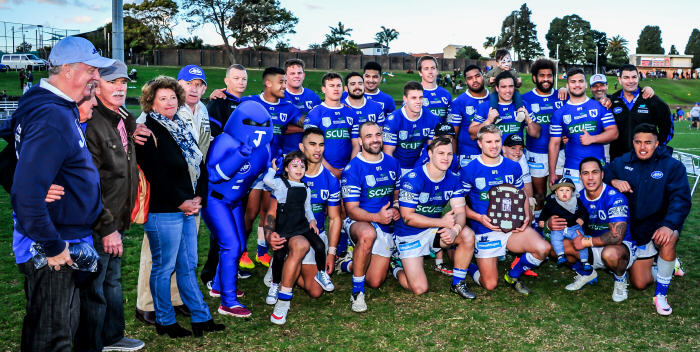 Members of the Hyde Family gathered with the victorious Newtown Jets after the presentation of the coveted Frank Hyde Shield for 2016 at Henson Park last Saturday. Photo: Gary Sutherland Photography

The Newtown Jets and the Manly-Warringah Sea Eagles will meet for the last time in an Intrust Super Premiership NSW competition game on Saturday.

The Manly-Warringah RLFC has formed a rugby league partnership with the Blacktown Workers club and it will be the Blacktown Workers Sea Eagles participating in next year’s ISP NSW competition. The Manly-Warringah players will be keen to end their final season in a NSWRL senior grade on a positive note and they are sure to provide very stern opposition to the Jets on Saturday. The Jets must win on Saturday to make sure of a top four finish and a double-chance in the 2016 ISP NSW finals series.

Saturday, 27th August at Henson Park is the annual Newtown Jets club reunion day, and this event has developed into a much anticipated and fun-filled inner western Sydney community occasion. It’s also a great day for the kids as well with jumping castles and face-painting, plus the always-popular Jetman and Syd the Pig who will be there to high-five the youngsters and to participate in priceless family photo opportunities. Naturally the kids are welcome to kick the ball and run themselves ragged on the field at half-time and after full-time.

Please note that both drinks kiosks will be remaining open for an hour after full-time on Saturday. This is a chance for our supporters to have a drink with all their friends at Henson Park for the last time in the 2016 season. It was trialled last year and worked well. It is also a chance for the fans to mix with the players and team officials after the game and to wish them well for the upcoming ISP NSW finals series. Drinks will be sold at discounted prices. No doubt there will be quite a few former Newtown Jets and Bluebags players in the crowd, and it will be a great opportunity to snare those elusive autographs and/or photos!

The Manly-Warringah team is:

The match will be broadcast by Steele Sports live from 3.00pm on: www.steelesports.com.au

No Rugby League club is better served than Newtown when it comes to photographic expertise and quality:

Michael Magee has put together a superb collection of his Newtown Jets photos from the 2015 season, From The Touchline 2015 Photobook . This would make a marvellous gift to any discerning Newtown Jets follower or a splendid addition to your own special collection. The book can be purchased online at:

https://michael-magee-y6m3.squarespace.com/shop/dnzsb2xuqzz7qj3moauiw9l1upxw3r , or at the Newtown Jets merchandise stall in front of the grandstand this Saturday.

There is a photo from last Saturday’s game at Henson Park in today’s Rugby League Week on page 42.

And there’s great coverage of the Jets-Bears game on pages 23 and 24 of this week’s Cooks River Valley Times (Wednesday, 24th August):  http://bit.ly/2bR4xkw

After mingling with the Jets supporters and friends at Henson Park at the after-match Happy Hour on Saturday, the Newtown players and staff will then be adjourning to the Vic on the Park, 2 Addison Road, Marrickville (opposite Enmore Park) for dinner and a few drinks. All Newtown Jets supporters are welcome to join us there.

Of the 17 players who played for Newtown in that 2006 Grand Final team, five are still playing in the NRL, ISP NSW, UK Super League or UK Kingstone Press Championship competitions.

The first correct entry emailed to jets@newtownjets.com that names any four of those five players still playing will win an item of first class Newtown Jets clothing or merchandise.