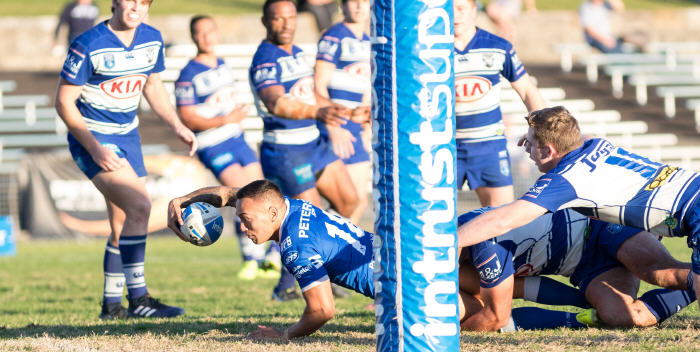 Jets and Bulldogs share the points as they entertain the Hipsters

The Newtown Jets and Canterbury Bulldogs drew 26-all in their Intrust Super Premiership NSW rugby league match at Henson Park on Saturday. While the Jets would have preferred to take two competition points, in the circumstances they were probably willing to settle for one. The Bulldogs led 18-6 at halftime, 22-6 early in the second half and by a commanding 26-12 with twenty minutes left to play. The Jets came home strongly with three tries to draw level at 26-all, and missed a long-distance penalty goal attempt right on fulltime.

The annual Salute to the Hipsters promotion was a great success, with a crowd of over 2000 enjoying a perfect sunny autumn afternoon at family-friendly Henson Park. The crowd was right behind the Jets as they fought back in the last twenty minutes and the players certainly responded to their home fans’ partisan support.

The Jets looked to be gone for all money early in the second half when the Bulldogs led 22-6. To make matters worse, second-rower Jayden Walker and halfback Penani Manumalealii both suffered bad head knocks in the first half and were ruled unfit to resume playing by the club doctor. This left Newtown with only two substitutes on the bench for the entire second half, and led coach Greg Matterson to deploy some drastic and makeshift on-field positional changes.

Despite being short-handed on the bench, the Jets finished the stronger of the two teams. The huge Canterbury forwards had given the Newtown boys a hammering in the first half, but the Jets definitely finished the better and unluckily missed an almost-certain try-scoring chance with the scores locked up at 26-all five minutes out from fulltime. Newtown was awarded a penalty in the last minute of play but the long-distance goal attempt drifted wide.

The Newtown forwards all had strong second halves with particularly big games from front-rowers Kurt Dillon, Tepatasi Fuiavailili, Saulala Houma and Jaimin Jolliffe, and the two hookers Manaia Cherrington and Kurt Kara. Cherrington was in his best form of the season, scoring one try and laying on the final pass for two more tries. Second-rower Jack Williams tested the Bulldogs defence with some determined runs. The Jets were made to pay for individual errors that put themselves under pressure and presented the Bulldogs with good attacking field position.

The Jets have a bye in the ISP NSW competition next weekend, and then play away to the Newcastle Knights in Cessnock on Saturday, 10th June.