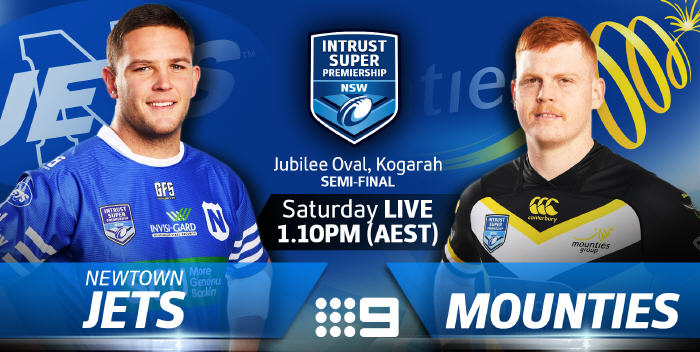 Jets and Mounties in Sudden-Death Showdown this Saturday, 8th September

The Newtown Jets and Mounties (Raiders) face off in a NSWRL Intrust Super Premiership elimination semi-final at UOW Jubilee Oval, Kogarah this Saturday. Newtown lost to St George-Illawarra 28-26 in a qualifying final at Penrith last Sunday, while Mounties defeated the New Zealand Warriors 21-20 in an elimination semi-final last weekend.

In their two competition matches earlier this year, the Jets defeated Mounties 34-20 at Hinchinbrook on the 12th May, and in the return encounter at Henson Park on 16th June Mounties prevailed by 22-16.

This Saturday’s match details are:

Newtown’s team on Saturday is:

The Dirty Reds will be playing in another sudden-death elimination semi-final this Saturday, immediately following the Jets-Mounties ISP NSW match.

Here are the full game details: