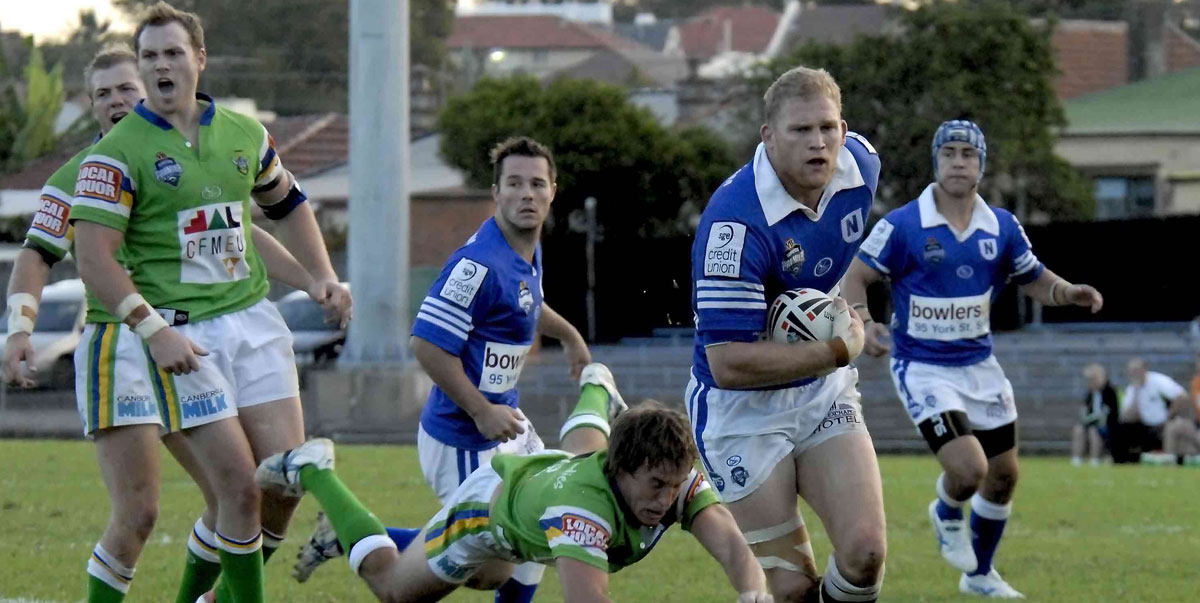 Photo caption: Here’s some action from when Newtown and the Raiders last met at Henson Park in 2007. Jets backrower Nigel Plum has broken through the Raiders defence, with team-mates Josh Lewis, Jamie Soward and Shaun Foley in the background. Photo: Gary Sutherland Photography.

When the Newtown Jets and Canberra Raiders clash at Henson Park this Saturday, it will be the first time that the two clubs have played each other at this historic ground in 14 years.

The Raiders came back into the premier NSWRL competition this year after having undertaken a joint venture in the Queensland Cup competition for several years after 2007, and then entering into a partnership with Mounties from 2012 until this season.

The Jets take on the Canberra Raiders on Saturday, 5th June at Henson Park, with kick-off timed for 3.00pm.

ABC Grandstand will be at Henson Park on Saturday, with their commentary team headed up by Andrew Moore, a radio personality well-known to Jets fans. Luke Lewis and Michael Carayannis will be Andrew’s co-commentators on Saturday.

Dr Grace Bryant served as Newtown’s regular team doctor in the 1990s and early 2000s, as well as filling in at short notice on numerous occasions in more recent years. Dr Grace is renowned for her professionalism and top-level sports medicine expertise and she was recently made a Life Member of the Commonwealth Games Association. She is particularly well-remembered at Newtown for her input into the Jets’ hat-trick of premierships in the NSWRL Metropolitan Cup competition between 1995 and 1997. The Newtown RLFC extends congratulations to Dr Grace on this the latest of the many distinguished awards that she has won during her outstanding career in sports medicine.

Congratulations to big Franklin Pele who made an enormous impact for the Newtown Jets in the match against St George-Illawarra played at Henson Park on Saturday, 22nd May. Franklin scored two tries in the opening four minutes, with the second of these tries going viral on social media. He then made his NRL debut with the Cronulla Sharks against the Gold Coast Titans on Sunday, 30th May. The Newtown RLFC extends congratulations to Franklin on his NRL debut, and he obviously has a great playing future in front of him.

Many Newtown supporters will remember the hard-running backrower Wairangi Koopu, who played with the Jets in 2000 when the club was in a partnership with the Auckland Warriors RLFC. Wairangi went on to a long career in the NRL with the New Zealand Warriors and the Melbourne Storm, as well as gaining international rugby league representative honours with the New Zealand Kiwis. He recently made a comeback to the playing ranks, turning out with the Taniwharau RLFC in the no-nonsense Waikato rugby league competition. Wairangi had played junior rugby league with Taniwharau in the 1990s!

Don’t forget you can buy Newtown Jets clothing and merchandise online by going to:  www.newtownjetsclothing.com.au

Jets clothing and merchandise will be on sale at Henson Park this Saturday at two separate marquee outlets.

The two Newtown Jets history books, Taking It To The Streets – The Second Life of the Newtown RLFC and Through Blue Eyes – A Pictorial History of Newtown RLFC are also available online through this link: https://www.newtownjetsclothing.com.au/product-category/books/

Both books will be on sale at the merchandise stalls at Henson Park on Saturday.