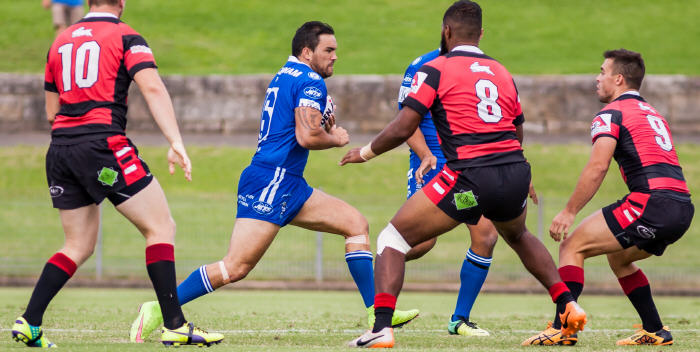 Jets and the Bears kick-start the new Rugby League season

The Newtown Jets and North Sydney Bears turned on a good standard NSW Cup Rugby League trial match at Henson Park last Saturday. The game was played in relatively mild weather conditions and was a low-scoring encounter by most pre-season trial comparisons. For the record, Newtown won 8-4 after the score had been 4-all at half-time.

The match was played in four twenty-minute quarters and this factor combined with the cool day probably enabled both teams to maintain their strong defensive performances for the entire game. As members of the Jets coaching staff remarked, the purpose of a trial match such as this is to allow as many young trialists as possible to get plenty of game time and to enable them to stake their claims for NSW Cup selection. The Jets and the Bears coaching groups were pleased with the conduct of the trial and both clubs each used about 23 players in the course of the game.

Norths scored the first try when they caught out the Jets’ short-side defence in the 6th minute. The Bears had the better of the play in the first quarter and Newtown backrower Jason Schirnack (formerly with Wests Tigers and Canterbury) was most impressive in defence.

Newtown took full advantage of a couple of repeat sets early in the second quarter, and their new five-eighth signing Jaline Graham (previously with Canterbury) showed Shaun Johnson-like elusiveness in scoring for the Jets in the 27th minute. With no goal kicks being taken, the scores remained at 4-all at half-time.

The Jets dominated territory and possession for much of the second half, and took the lead in the 55th minute when backrower and Lebanese international Tarek Elmasri won the race to ground the bouncing ball inside the Bears’ in-goal zone. There was some scope for improvement in Newtown’s execution and last tackle options in the second half. The Jets’ defence in the fourth quarter was well-organised and determined and enabled Newtown to retain their four-point lead.

Young Newtown forwards Treyvon Leuluai, Malakai Houma and Harrison Muller made good metres and carried the ball out from their own end with great vigour. Jaline Graham looked dangerous with the ball and put on several innovative plays.

There is no Newtown Jets trial on this coming weekend. Several Newtown players are likely to be invited to join the Cronulla Sharks NRL trial squad to play Manly-Warringah at Shark Park on Sunday, 14th February, at 5.00pm.

Newtown’s next full NSW Cup trial match is against Wests Tigers at Campbelltown Stadium on Saturday, 20th February at 5.00pm.

The match was played in four twenty-minute quarters.

North Sydney led 4-0 at quarter-time; it was 4-all at half-time; Newtown led 8-4 at three-quarter time and full-time.

Unavailable due to injury: