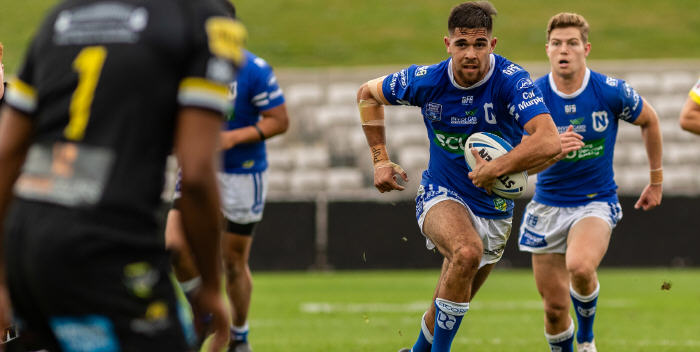 Jets big win sends them into the Preliminary Final

Newtown swept aside Mounties 34-16 in the Intrust Super Premiership elimination semi-final played at Kogarah Oval on Saturday afternoon. The Jets turned in a near-faultless first half to lead 18-2 at halftime, and then maintained their dominance by adding two converted tries to extend their lead to 32-2 after 56 minutes. Mounties scored their first try midway through the second half, and managed two more tries in the last seven minutes of the game.

Any concerns as to whether this young Jets team would bounce back from the previous weekend’s narrow qualifying semi-final loss proved to be groundless. The Jets displayed some of their best form of the year in the first half, when they commandeered more than 60% of possession and achieved a completion rate of 95%. Mounties tested Newtown’s defence in the opening ten minutes, but the Jets responded with tries to Briton Nikora, Billy Magoulias and Will Kennedy. Their two tries in the second half were scored by Sione Katoa and Wes Lolo, while Kyle Flanagan kicked seven goals from seven attempts (five conversions and two penalty goals).

This morale-boosting win was the result of an excellent team effort involving every player. Kennedy, Flanagan and Aaron Gray were the best of the backs, while Nikora, Lolo, Magoulias, Malakai Houma and Blayke Brailey were Newtown’s best forwards.

The Elimination Semi-Final details were:

This match was televised live on Channel 9 and broadcast by Steele Sports.

The Dirty Reds will meet Wentworthville at Leichhardt Oval on Sunday, 16th September at 1.00pm.