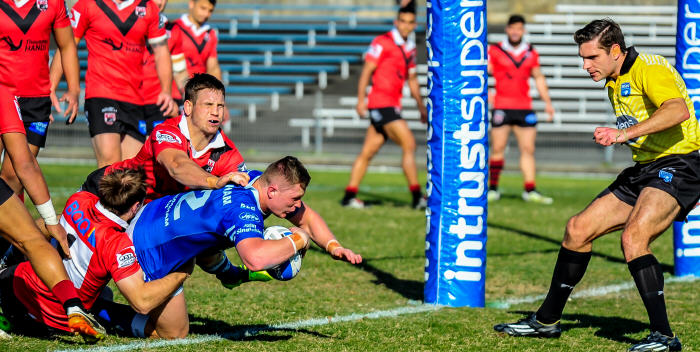 Jets bow out with a narrow loss to Bears

The Newtown Jets went down 16-12 to North Sydney in a hard-fought match at Henson Park on Saturday. As the Jets didn’t qualify for the Intrust Super Premiership finals, this was their last competition game for this year. Norths led 16-12 at halftime, and although the Jets threw plenty of good quality attacking play at the Bears in the second forty minutes, they were unable to overhaul that narrow four points deficit.

Newtown had beaten North Sydney by an identical score, 16-12, in the tenth round encounter on 14th May. The two teams were playing for possession of the Frank Hyde Shield on Saturday and as both teams had won one game each this year, and as they had scored equal points for and against, the contest for the prized Shield in 2017 was declared to be an honourable draw.

The Jets looked to be in trouble when Norths extended their lead to 16-6 ten minutes out from the half-time break, but Newtown pulled back with a converted try virtually on the forty-minute mark. Newtown went very close to scoring on at least four occasions in the keenly-contested second half, but not even the big reunion day crowd managed to will the Jets to conjure up an elusive match-winning try. Both teams defended very well in the second half and the crowd remained absorbed as play swept from one end to the other.