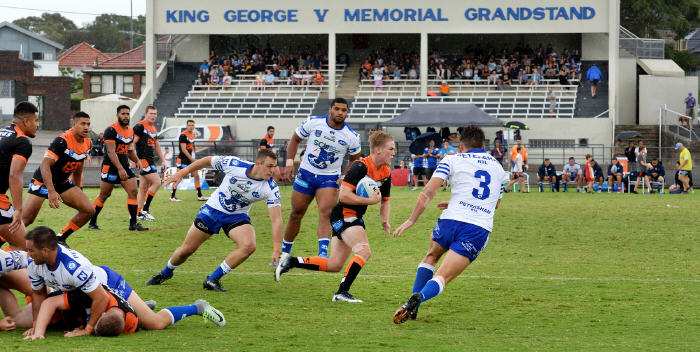 Jets complete their trials on a mediocre note

The Newtown Jets were well beaten by Wests Tigers in their final trial match played at Henson Park on Saturday evening. Wests Tigers scored five tries to two and won 20-8, with both teams agreeing there would be no conversion attempts during the game. Wests Tigers led 12-8 at halftime and kept Newtown scoreless in the second half.

Jets coach Greg Matterson was disappointed with this performance, noting that the squad had trained very well in the latter stages of the pre-season. Newtown’s form was down on the previous Saturday’s strong showing against the Mounties/Raiders team. Matterson said there was plenty to be done in the next two weeks prior to the start of the Intrust Super Premiership NSW competition rounds. There will be several Cronulla Sharks full-time NRL squad members joining the Newtown ISP NSW team before the opening competition game on Sunday, 5th March.

Newtown made it hard for themselves on Saturday with a low completion rate in both halves, and poor last play options limited the Jets’ scoring opportunities. Several kicks into the Wests Tigers in-goal zone had gone dead, thereby denying the Jets the chance of a repeat set with the ball.

Newtown suffered some pre-match misfortune with impressive young lock Jayden McDonogh breaking down in the warm-up session, and fullback Luke Towers being ruled out with a leg injury on the previous Thursday. The penalties had gone Wests Tigers way 9-4 which put added defensive pressure on the Jets.

(No conversion attempts taken by agreement between both teams)

It was grey and overcast at Henson Park on Saturday evening, and quite a climatic contrast to the living hell of the previous Saturday.

Newtown’s completions at half-time were 7 out of 15.

Newtown’s second half completions: 10 out of 18.

Jayden McDonogh injured his knee in the team warm-up.

Luke Towers was out with a groin injury.